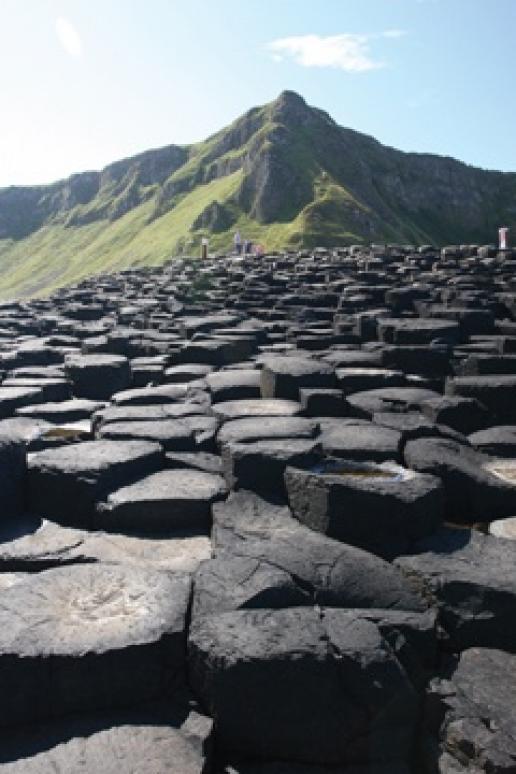 The most famous geological feature of Northern Ireland is the Giant’s Causeway in north Antrim, formed of 40,000 hexagonal columns of basalt. A World Heritage Site since 1986, in the 18th century the causeway was considered the Eighth Wonder of the World.

The stone that forms the causeway is basalt from the early Tertiary period (62-65 million years ago). It formed into hexagonal columns as the result of crystallisation caused by rapid cooling on contact with water, although legend says it was built by the giant Finn MacCool to reach his enemies in Scotland.

The Giant’s Causeway and Causeway Coast Site covers 70hectares of land and 160hectares of sea along the north Antrim coast within an area of a spectacularly dynamic coastal landscape.

It is just about to get a new visitor centre that will be built from the basalt from that region (although not taken from within the World Heritage Site) to a design by Dublin architects Heneghan Peng.

There are 10 quarries extracting basalt and the stone from each of them has been tested. The stone nominated for the project is from Patrick Bradley’s Craigall Quarry in Kilrea, Co Derry.

Originally, imported basalt was being considered for the project. What helped get local material specified were the results of a three-year EU-funded project carried out by architectural practice Consarc and Queens University Belfast with the help of the Geological Survey in Northern Ireland.

The project has mapped the stone buildings of Northern Ireland, recorded their condition and traced the stone sources. It was because the sources of indigenous basalt had been identified that it could easily be specified.

The database is an invaluable tool. Giants Causeway might be the most spectacular and best known of the rock formations of Northern Ireland, but, like the rest of the British Isles, Northern Ireland has an interesting diversity of stones, many of which have been used for building over the centuries and a few of which still are.

You can find out about the stones, the quarries that have produced them (including those that continue to do so), and some of the buildings for which they have been used in a book called Stone by Stone* published earlier this year.

It is entirely accessible, easy to follow, includes plenty of pictures to illustrate points and identify buildings, and is pretty comprehensive.

In mentioning buildings it includes those that have used imported stones, especially where those stones come from elsewhere in the British Isles, as a lot of those used in construction in Northern Ireland did (and do). The book has 317 pages and is a handy field guide size – that is, small enough to fit into a pocket.

It was written as a collaborative project between Stone Conservation Services of the Consarc Design Group (Dawson Stelfox, Joanne Curran and John Savage) and the Weathering Research Group of Queen’s University Belfast (Bernard Smith and Patricia Warke).

It is the product of a longstanding relationship between Consarc Design Group and Queen’s University – a successful industry-research partnership spanning 15 years, during which time they have worked together on award-winning projects such as the Albert Memorial Clock, St George’s Market, St Matthew’s Church and the Parliament Buildings at Stormont.

The book is a complement to a website (www.stonedatabase.com) produced using the results of the research.

The work took three years to complete and cost £350,000. Its aim was essentially the same as the Strategic Stone Study in England being carried out by the Britishâ€ˆGeological Survey and English Heritage (for an update of that see the Heritage report that starts on page 20). That is, it was to identify which stones had been used for which buildings.

Finding all the quarries in Northern Ireland and buildings that have been constructed of the stone from them is easier than it is in England simply because of the size of the task. The population of the six counties of Northern Ireland (Antrim, Armagh, Down, Fermanagh, Londonderry and Tyrone) was estimated by the government to be 1.7million last year compared with the 51.8million people in England.

Joanne Curran, one of the people from Consarc involved in the research and one of the authors of Stone by Stone, spoke about the project last year at the British Geological Survey symposium, ‘Building a Future for Stone’, in London.

She said the creation of the database employed two surveyors full-time. They identified 1,800 buildings and 260 monuments. They had to identify the stones used in those structures, which was where the Geological Survey came in. The condition of each building was assessed and from that the performance of the stone in use was derived.

To assess the performance of a stone, Queens University adapted a computer program written for use with cancer patients to record how severe the cancer is and the extent of its spread. When developed for use with buildings, it was found to be a robust system that was also comprehensible to non-geologists. The deterioration of buildings was classed from one to four, with one being the best and four the worst.

The project comprised an extensive programme of surveying, stone sampling and analysis that was used to produce the database of listed buildings, monuments and stone quarries on layers of an interactive GISâ€ˆmap that is now used in a simple point-and-click way. In enables the Northern Ireland Environment Agency, for example, to see at a glance the sandstone buildings of Northern Ireland and what condition they are in. They can then asses the needs for various stones for repairs.

The GIS map is not available on the stonedatabase.com website because it was felt it was too big for current technology. Instead, a simplified version of the data is included in a similar way to its presentation in the Stone by Stone book.

The work is not yet over, however. Consarc and adding more information to the database as they get it and Queen’s University are currently adding a layer to the GIS with information about algal and other growth on various kinds of stone.

The Quarry Products Association in Northern Ireland, meanwhile, is working with the government there to encourage aggregate producers to make their stone available as dimensional stone. The basalt being used for the visitor centre at the Giant’s Causeway, for example, is normally produced as aggregate.

It is also hoped that a full suite of test results on the stones of Northern Ireland can be produced to make indigenous stone easier to specify, for new build as well as restoration, especially when the environmental impact of building materials is being considered. The Central Procurement Directorate of the Northern Ireland Government is involved in the project to get more local materials used for public sector projects.

In common with other parts of the UK, most of the stones historically used for building in Northern Ireland have reflected the local geology, which is most commonly sandstone and limestone.

There are accessible sandstone outcrops in various places in Northern Ireland, mainly from the Triassic and Carboniferous periods, although there is also Greywacke from the Silurian.

The Carboniferous sandstones of Counties Fermanagh, Tyrone and Londonderry are often found interbedded with limestone and the two types of stone have frequently been used together, the limestone for walling and the sandstone dressed as quoins, cills and worked detail.

The most widely used Triassic sandstone is Scrabo from the Dundonald and Newtownards areas of Co Down. Appreciated for its range of colours from grey to yellow and shades of pink and red, it was the stone used to build Stormont Castle in Belfast, a Scottish Baronial style castle that is an 1858 re-working of an earlier castle. The castle should not be confused with Parliament House, a neo-classical building constructed of Portland limestone imported from Dorset.

Parliament House is home to the Northern Ireland Assembly, re-established under the terms of the Belfast Agreement 1998 (the Good Friday Agreement). It was constructed for £1.7million in 1921 in the grounds of Stormont Estate to accommodate the then newly formed Government of Northern Ireland.

The building’s architect was Arnold Thornley from Liverpool, who later received a Knighthood from George V in recognition of his architectural work.

Much of the interior of the building is marble. The Great Hall is made entirely from Italian travertine. All of the engraving was fashioned by Italian craftsmen who made the journey to Northern Ireland in the 1920s.

Northern Ireland’s own limestones have been widely used for building. Ulster White (Antrim Chalk) is from the Cretaceous 65-100million years ago. There is Dolomitic Cultra limestone from the Permian, 248-290million years ago and Carboniferous limestones in Counties Farmanagh, Tyrone and Armagh, with a little found in Co Down.

Conglomerates and breccias or various kinds are found in Northern Ireland and the Drumarg conglomerate was used for several important buildings in the City of Armagh. Among the buildings in the city where it can be seen is St Patrick’s Cathedral.

After the sedimentary stones, the most common building stones in Northern Ireland are the granites. The most commonly used are Mourne and Newry in Co Down. There is also Tardree Rhyolite, formed in the early Tertiary during a lull in the formation of the Antrim basalts.