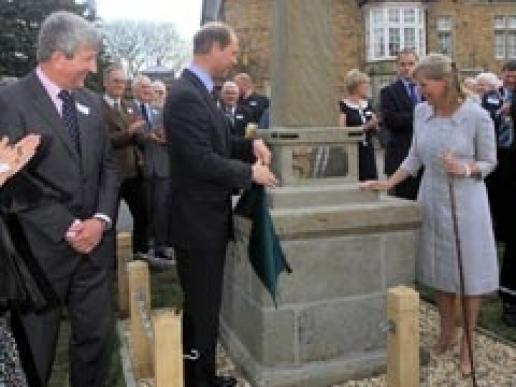 Prince Edward, Earl of Wessex, and his wife Sophie of Wessex, spent today (7 May) in the Royal Forest of Dean, taking time to unveil a plaque on a newly restored and cleaned obelisk outside the famous Speech House. The Pennant sandstone obelisk is said to mark the centre point of the Forest of Dean.

Photographs of the obelisk date back to the late 1800s, when it was just a large square base block. The new, smaller base and needle were erected in 1957, to celebrate the then Viscount Charles Bledisloe’s 90th birthday and his 50-year service as a Verderer. (Verderers were originally part of the ancient judicial and administrative hierarchy of vast areas of English forests).

The obelisk was made and has been maintained using the pennant sandstone of the Forest of Dean. The stone, from Forest of Dean Stone Firms, was used again for the current restoration unveiled by His Royal Highness today.

Restoration work included a full stone clean, a newly produced top stone and a brass plaque recording the unveiling by the Royal couple.

Nick Horton, the Managing Director of Forest of Dean Stone Firms, was thrilled to meet Price Edward and present his award-winning quarry and stone works.