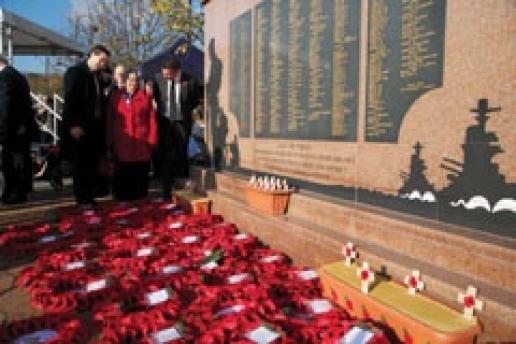 A lot of masonry companies were involved in cleaning and repairing war memorials last year in preparation for the centenary commemorations of World War I. Some, such as stone hard landscaping specialist CEDâ€ˆStone Group, were even involved in supplying new memorials. David Brooke-Mee, Senior Estimator at CED, explains what this project in Chester-le-Street meant to him.

It’s rare in life to be able to achieve something that really matters to a great many people. But a memorial in Bridge End, Chester-le-Street, a small market town in County Durham, commemorating the lives lost in the World Wars, was just such an achievement.

The town’s original war memorial was dedicated in 1925 but was removed in 1932 because the market place was to be made bigger. The extension entailed the covering over of a small river with the strange name of Cong Burn. That could not take place without demolishing the monument.

The memorial was partially rebuilt behind St Mary and St Cuthbert’s Parish Church in the 1950s, but only the plaques were used.

The location was not ideal because it was tucked away behind the church out of public view. The space around it could not accommodate everyone for Remembrance Day gatherings and there was a strong public opinion that a new memorial should be built in time for the commemoration of World War I. To that end, in 2001 the first Chester-le-Street War Memorial Association was formed.

The group’s remit was to come up with a design for a new memorial in the centre of the town and to raise the necessary funds to see it through to its construction. Progress was erratic and by 2010 it had become clear a more concerted effort was needed.

Public opinion was once again sought and by a vote of 797 to 17 it was decided silhouettes designed by Bill Hall should be incorporated into a monumental monolith. It was further resolved that the new memorial would additionally contain the names of all those from the town who had lost their lives in conflicts post World War I.

In 2011 Bill Hall called CED in order to speak to the experts about the technical aspects of constructing the memorial and to seek advice on the choice of stone to use. Bill was put through to my desk and the two of us spoke for the first time.

Bill explained to me that he wanted to have the names displayed against a dramatic background, which depicted snapshots of the navy, army and airforce by way of silhouettes. He was talking about using several colours of stone.

Bill and I spoke at length and various ideas were discussed and explored, some having to be discarded as either impossible or impractical, before arriving at a final solution.

I forwarded samples of the stones we were proposing to use to the Chairman of the committee, Jim Carroll, who presented them to the committee before instructing us to provide him with approximate costs based on the selection of those stones.

The main issue we had to address was which granite to choose to form the main panels, steps and coping stones.

It was obvious from the start that whichever material was chosen, it would need to be consistent in colour across all components within the design.

An orange/red granite quarried in the north of China was chosen for the purpose. We knew from the outset that it would be impossible to have every component matching, particularly with the red granite chosen. However, to give us the best chance of achieving a colour consistency we had to cut all of the individual components from one block of stone, which had to be extracted from the quarry for the purpose.

The block of stone extracted weighed 18tonnes. It had to be transported 20kilometres along a rough road from the quarry to the factory where the scants were cut on a gangsaw and then polished on an Italian polishing machine.

The factory was instructed to set aside the unused scants for use as spares if it became necessary, a decision which proved to be fortuitous later on.

Next we had to consider the best way to fit all the components together, bearing in mind that the three different materials came from different locations in China separated from each other by hundreds of miles.

I knew that quality control was paramount and for this reason I chose to work with a UK company, JW Sutherland Ltd in the north of Scotland, a company CEDâ€ˆhas a long association with.

Sutherland’s equipment was more than adequate for the task of waterjet cutting the silhouettes to the required size and shape and routing out the same shapes from the polished red slabs using the company’s Monlevi CNC equipment.

The conversation that began with Bill that day has brought us down a journey that has meandered through China and then visited the north of Scotland for cutting before arriving at its final destination.

Along the way, disasters inevitably happened.

I had been anticipating the arrival of the red granite with great excitement. I was deeply saddened when, after months and months of planning, the granite finally arrived in our yard and all six huge slabs had snapped in half in transit.

This meant we had to instruct the quarry to reproduce them without delay. They informed us that doing so would use up all the spare scants, so any future problem would not be a simple fix.

I was greatly relieved when Michael from JW Sutherland informed me all the stone, including the blue/grey granite and the black basalt, had finally arrived safely in his yard.

At this point, the final details of the names to be included on the plaques had not been forwarded to us and time was running out, with Remembrance Sunday drawing inexorably closer.

Michael needed the names before he could start setting out the lettering – another time-consuming task. In the meantime however, Michael busied himself with cutting the silhouettes and routing the corresponding shapes out of the orange/red granite, so that when all was done, he could glue the pieces in place.

A day or so before the final list of names was received, Michael rang me up to say that while going through the process of routing the front right panel it had snapped on the workbench.

It was a disaster! I knew we didn’t have any spare slabs in China and, in any case, we didn’t have enough time left to import a completely new set of stones from China to start the process all over again.

I contacted Jim Carroll at the Chester-le-Street War Memorial Association and told him what had happened. I proposed using the central rear panel to replace the damaged panel and that the rear panel be substituted with a piece of Sutherland’s local polished Caithness stone.

I suggested some of the orange/red granite from the broken panel be used to cut out the shape of the Lancaster bomber on the rear and inserted into the Caithness slab. Jim approved the solution but preferred the idea of simply sandblasting the shape of the bomber into the face of the new stone. That agreed, we were able to proceed without further delay.

The penultimate stage of the operation in Scotland was to produce a vinyl mask of all the names so they could be sandblasted into the grey granite panels.

Photos were sent to us and it was noticed that the names were not properly aligned. There was nothing for it but for Sutherland to re-polish the grey granite and start the sandblasting process all over again from scratch. With that done and everyone happy with the result, the next stage was to paint each character by hand with gold paint, which took ages.

The final stage of Sutherland’s involvement was to glue in place the silhouettes and name plaques that had been cut to shape with great precision so as to fit perfectly into the orange/red granite. That done, we were able to send in our transport to collect the crates and deliver them to Lumsden & Carroll, the company waiting to receive them in Chester Le Street in order to construct the war memorial.

We see the results before us now. The monument stands an impressive 2.5m high and more than 5m wide. It is a beautiful thing. The workmanship in it is outstanding and none of the problems we encountered are evident.

There are 432 names on the memorial – and clearly some families lost more than one of their loved ones.

It’s a tribute to the folk of Chester Le Street that they have finally done what they resolved to do when the idea of creating this monument was first conceived.

The efforts of everyone in the chain have contributed to bringing the memorial to its intended resting place in time for the Armistice Day service. The quarries in China successfully achieved the first stage of finding the right block, transporting it over difficult terrain to the factory and then cutting giant slabs to tight tolerances and polishing them to the required finish, before carefully packaging them securely enough to withstand a rough sea crossing. The craftsmanship of JW Sutherland in transforming the slabs into the finished parts of the memorial cannot be denied. Neither can the company’s patience and skill. The dedicated team at CED ensured communication with China was clear and accurate and kept the project within the necessary timescales and budgets, going the extra mile to ensure a lasting tribute to the fallen heros. Lumsden & Carroll clearly understood its objectives, producing a solid foundation and core of the monument with precision, which allowed the precut and shaped panels and coping to be installed without a hitch. The company finished off the project by installing the granite ‘artillery shell’ bollards around the memorial.

For my part, when I watched the care and dedication to the task in hand from each of the people in my team at CED I was humbled. They all came over to my screen to look at the first images of the completed monument, which had been sent to me by Tom O’Gara of Lumsden & Carroll, and they were delighted… I dare say also rather proud of themselves – and deservedly so.

For me, though, it’s only ever been about those names. There are so many. So many died. I feel deeply honoured to have helped achieve the end result, and I consider it to be the most important thing I have ever done. Those young men and women who gave their lives will always have my deepest respect and gratitude.