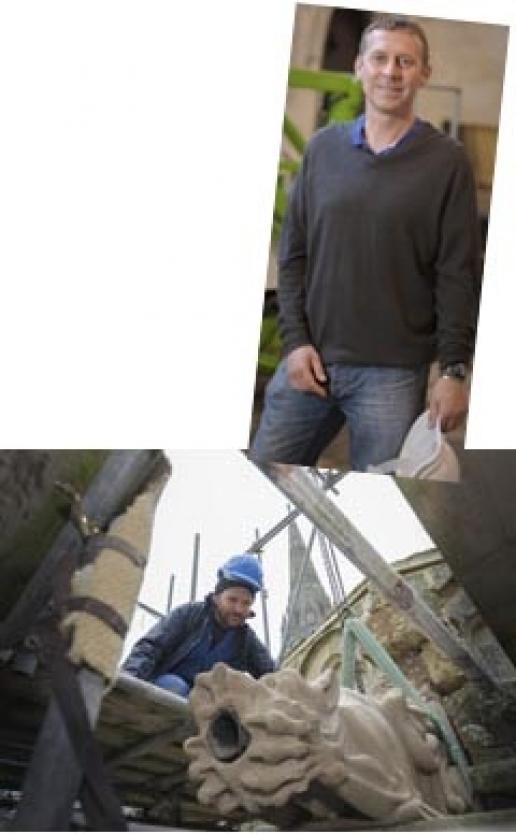 The largest gargoyle to be replaced on Salisbury Cathedral for more than 150 years has been lowered into position and fixed on the Chapter House roof.

It completes replacement work in this section of the Cathedral’s Major Repair Programme, which is now more than three-quarters complete.

Matt Barton (pictured right), one of Salisbury Cathedral’s nine skilled stonemasons, was given the opportunity to carve the new gargoyle, replacing one from the 1850s that was badly eroded and no longer fit for service.

The new one is carved in Portland stone, from a block that started at 620kgs, 1625mm long, 400mm high and 400mm wide. After 470 hours, when the work was finished, the gargoyle that went on to the building weighed 275kgs. It joins six other gargoyles on the Chapter House, including a blocked off, non-functioning medieval survivor.

Matt said: “It was a really interesting project… and very satisfying to see the new gargoyle emerge from the original block of stone.

“We removed the damaged gargoyle from the Chapter House in February and mended it so I could use it for reference. The new gargoyle is modelled on it but with an improved design, so hopefully it can better fulfill its purpose and achieve maximum long term survival. Replacing a gargoyle is very rare. Two smaller ones were replaced on the Cathedral’s West Front in 1998 but none have been worked here since.”

The Chapter House, built, like the Cathedral, in the 1260s, remained untouched until Gilbert Scott’s major re-ordering of the Cathedral in the 1850s-60s.

In his desire to improve the way water was shed from the building, Scott carried out a re-ordering of the roof and gutters, extending the buttresses and introducing new style gargoyles. These replaced down-pipes and hoppers in the corners of the original buttresses.

The remaining medieval gargoyle is in Chilmark stone on the untouched buttress on the west face of the Chapter House. It is in poor condition, decayed and non-functional, but is being left in position for its historical interest.

The work currently taking place is centred on the north-east transept area of the building and the Chapter House, home to the finest of the four remaining original Magna Cartas, signed in 1215 by King John. The Major Repair Programme needs a further £7million to ensure its completion – money that is currently being raised by the Cathedral's Development Department.

The Major Repair Programme is now being led by a new Clerk of Works. The Cathedral's stone sawyer, Gary Price, has been appointed to the post and takes over responsibility for leading and directing the work of the Cathedral’s specialist team of masons, glaziers, conservators and sawyers in completing the programme.

Gary joined the Cathedral’s Works Department in July 1986 as its first stone sawyer and has learnt a lot ‘on the job’.

He says: “I am honoured to become Clerk of Works of this great Cathedral – it doesn’t get better than this for me. I’ve been here 26 years, since the start of the spire appeal and Major Repair Programme. I have had input to or cut every single stone worked on the building since.

“Now I’m looking forward to leading the Works Department at an exciting time as we enter the last quarter of what is one of the most extensive major repair projects of any English cathedral. It’s certainly going to be a very different way of working… but I hope to do the occasional day as sawyer to keep my hand in!”

Canon Treasurer Sarah Mullally said: “I am delighted that Gary has been appointed as the new Clerk of Works. He brings with him to this new post a wealth of experience of the Major Repair Programme and the team of individuals involved.

“He has a great enthusiasm which will be a real asset, not just as we undertake future work but also as we seek to continue to engage others in the programme and its funding.”

Salisbury Cathedral employs a team of highly skilled craftsmen and women, including nine stonemasons, a sawyer, three conservators, a carpenter, a plumber and four glaziers.

The team is based on site and they all work on the Cathedral’s Major Repair Programme, restoring and preserving this built heritage for the future. The Cathedral is one of only eight in England that retains its own works departments.

Gary lives in Harnham with his wife and three children.