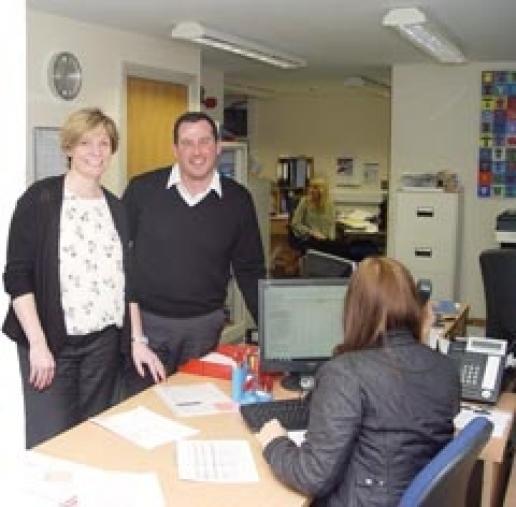 In 50 years Bonsers has gone from window cleaner to major regional conservation contractor working on some of the most important historical buildings in the Midlands... and beyond. NSS talks to Jo Bonser and her husband, Richard Hill, about the success they have achieved.

Richard Hill thinks of conservation as interpretation. When he and his team survey a building they are listening to what it is telling them and then translating that into a plan of action – a plan that will often save the building from dereliction or at least further deterioration.

“We interpret what buildings say because they don’t have a voice,” says the Director of Bonsers, the specialist restoration/ conservation company based in Kirklington, near Newark in Nottinghamshire.

Last year Bonsers marked its 50th anniversary by inviting colleagues, clients and friends to a celebration at the Galleries of Justice in Nottingham (See NSS November issue).

The Galleries of Justice were for centuries the city’s courts and prisons. Today they are a museum and an example of the skills of Bonsers as the building is just one of hundreds in the East Midlands that the company has been involved in restoring and renovating.

These days the company is headed by Jo Bonser, the third generation of her family to be in charge, Richard Hill, who is her husband.

They met on a Thomas Fish site in Derby where Richard was refurbishing a listed building – The Old Nunnery – in 1995. Bonsers used some of its specialist cleaning equipment on the top floor. “It was love at first site,” jokes Jo.

In 2007, Bonsers also worked on the renovation of what is now the Bread & Bitter pub. It was originally a bakery and had once been the offices of Bonsers. The company kept its machinery in front of the old bread ovens.

Bonsers was established in 1963 by Ernest Bonser, who made a small living cleaning windows in and around Loughborough. He was soon joined by his eldest son, Peter. In 1966 Mike, Jo’s father, was made redundant after completing an apprenticeship with Midland Plastering and also joined the firm.

From window cleaning they moved into office cleaning, which, in the early 1970s, took them on to more specialist cleaning of buildings. The 1980s saw ‘Operation Clean Up’ in Nottingham that gave Bonsers the opportunity to hone its masonry cleaning skills and was the trigger for it to broaden its spectrum of skills, eventually moving into conservation and restoration. It still carries out masonry cleaning as part of this work, although more general cleaning has long since been left behind.

In 2006 Jo completed a management buy out of the business, allowing her father and mother to retire. Her uncle Peter remained in the business until he also retired in 2011, although he still helps out when needed.

Further expertise has since been added. Gaynor Mallinson, a Conservation Officer for 25 years, the last 12 with Newark & Sherwood District Council, was recruited in 2010. In 2012 a chance meeting with a young, newly qualified quantity surveyor with a Degree in History, Daniel Emerson, led to him joining the company.

During the summer of 2012 Bonsers was working for a domestic client on a Grade II listed property in Bunny. Richard struck up a working relationship and the client, Paul Thorneycroft, who had been in the Army for 28 years and had left as a captain, is now Bonsers’ Operations Manager.

They join 40 people employed by Bonsers these days and, says Richard: “It means something to us to employ local people.” He adds: “I could lay on five more people tomorrow but they’re not there.”

It is not only a question of finding the right skills but also the right attitudes. When the right people are found, the company does its best to keep them and develop them, investing in apprenticeships, NVQs and up-skilling courses. All its operatives have conservation CSCS cards.

“Our enquiry board has been full for two years now. It has been relentless. We have had to turn down pricing some jobs.”

Bonsers’ standing in the heritage sector has grown exponentially over the years and today the company is working on two of the most important heritage projects in the region – Cromford Mills in Derbyshire and the Archbishop’s Palace in Southwell – although it says it is never too busy to take on a variety of smaller jobs as well.

Cromford Mill, these days a World Heritage Site, was built by Richard Arkwright in 1771 to spin cotton. The patented machines developed at the mill by Arkwright played a major role in the industrial revolution in the UK, although they and subsequent uses of the mill have left their toll in terms of pollution. Dealing with it is part of Bonsers’ job. The personnel working there are fully protected with bespoke training, protective equipment and frequent analysis of blood and urine. All waste materials from the building are considered contaminated and have to be disposed of either to special landfill sites or to special incinerators. So far, 128tones of excavated material and 12tons of contaminated waste has been sent for incineration, transported in sealed containers to minimise risks on route.

At the Archbishop’s Palace in Southwell, the walls of the ruins are being given a soft capping (they are topped with grass to protect them after being consolidated) and English Heritage has partnered with Bonsers to provide training on soft capping on the site to other conservation companies in the region.

Richard: “We’re quite fortunate that we work with people who want the best for their buildings.”

But, like many companies in conservation, Bonsers is often called in only when a fault becomes apparent, usually because damp appears inside the building. That is often the result of a damaged gutter or drainpipe that has been left unresolved for too long. What could have been a cheap and easy repair has turned into an expensive major restoration project by the time Bonsers is called in. The company is trying to address that by encouraging clients with heritage properties to take out maintenance contracts.

“There’s a lot of buildings we wouldn’t have to carry out conservation work on if only someone had got hold of the problem earlier,” says Richard. “If we can advise people what they need to do to maintain their buildings and carry out that maintenance for them on a regular basis, we can save them a lot of money. And we can maintain the buildings in the right way. We can make sure a bit of damaged lead that costs £200 to repair isn’t going to result in £5,000-worth of damage in two years’ time.”

Such facilities management will be another new direction for Bonsers but will still come under its conservation banner. For clients with heritage buildings to look after, the benefit will be the security of knowing in advance the cost of maintaining the building each year rather than facing unexpected hefty bills when something fails.

Richard: “And all the work will be carried out by a company that knows what it’s doing – a proper conservation company.”