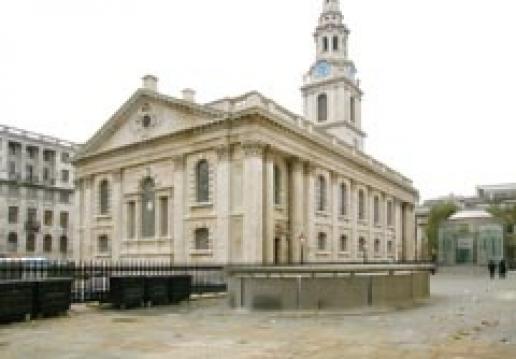 When it was built, the gleaming Portland limestone of the Church of St Martin-in-the-Fields led to it being called ‘the white church’. It is an epithet that is once again applicable, following its cleaning and renovation by stone and conservation specialists Stonewest. But the project also involved development of areas underneath the church, which has led to a new Nero Impala granite, glass and steel access pavilion and Nero Impala light-well in Church Path. They are the only outward signs of the subterranean developments that have taken place and now form striking architectural additions to the area in their own right.

A vicar who can say he has Prince Charles among his congregation but that the Prince is not his most prominent parishioner is probably justified in staking a claim to having London’s best known parish church, as the Rev Nicholas Holtam does.

He is the vicar of St Martin-in-the-Fields, off Trafalgar Square in London, whose church has just emerged from a £36million renovation programme that has seen Croydon-based stone and conservation specialists Stonewest on site with as many as 60 people at a time for nearly three years.

And Rev Holtam is delighted with the results. “Really the proof is in what you can see,” he told NSS when we went to look at the project. “What’s emerged is incredibly beautiful.” He says when the church was built it was known as the ‘white church’ thanks to its gleaming Portland limestone. It is an epithet once again appropriate.

He says even the acoustics have improved by returning the church to its original 18th century designs that both Handle and Mozart performed in.

The project, with Eric Parry Architects as principal architects, Caroe & Partners conservation architects and Costain main contractors, has restored James Gibbs’ London landmark inside and out to the conceptual clarity of the original design, as well as seeing new features built in a much improved public space created in Church Path, which links Charing Cross railway station to St Martin’s Place and Trafalgar Square.

Although the church re-opened for services last year following the completion of the interiors, which included Stonewest’s spectacular Purbeck, Blue Lias and York stone floors in the nave, chancel, sanctuary and crypt (see NSS November 2007), the outside was still hidden behind hoardings and cloaked in scaffolding when the Prince of Wales, accompanied by the Duchess of Cornwall, attended a thanksgiving service at the church in April this year.

After the service, the Prince, who is Patron of the Renewal of St Martin’s, performed the topping out ceremony on the new build pavilion and light-well element of the project in Church Path, assisted by Stonewest mason Sean Collins.

Church Path has now been completed and was opened in October by the Lord Mayor of Westminster, Louise Hyams (see the previous issue of NSS). The path has been widened by taking part of the land that used to fall within the church fence. It is the province of Westminster Council, whose contractors, Conway, laid the paving there.

Before the renovation work began there was a narrow, forbidding footpath along the side of the church between it and the John Nash North Terrace, a church building that has also been restored and extended and which houses the vicarage, church offices and The Connection at St Martin’s, a charity for the homeless.

The original idea had been to create a completely new building in the church courtyard, but with architect Sir William Whitfield (the master planner of Paternoster Square, among many other credits to his name) on the architectural panel and having consulted the Commission for Architecture & the Built Environment (CABE), it was decided that the development should be underground in the crypt and burial chambers.

New universal (they don’t like to call it disability) access and a light-well to allow in natural daylight and ventilation would be provided from Church Path. This solution was considerably more expensive than a new building above ground would have been and although Heritage Lottery Fund supplied more than £15million towards the whole project and the government put in £3million to support the church’s work for the homeless (which did not stop during the building work), most of the money was raised by private donation.

Those donations ranged from £1.2million to £60 given by four women in Soweto, one of whose children had been baptised in St Martin’s when she was a refugee in the UK.

The Rev Holtam says the first task at the beginning of the renovation of the church was to understand the building they had. That took three years. But from the investigations came the realisation of how much space there was under the church – more than 8,500m2, the equivalent of 14 tennis courts.

Geoff Hunt from main contractors Costain says: “The old crypt and burial chambers provided a labyrinth of small rooms, but these were impractical and pretty dilapidated. The response from Eric Parry Architects, who designed the scheme, was to demolish the old vaults and replace them with a new, two-storey basement to provide new kitchens for the Café in the Crypt, music rehearsal rooms, a parish hall, a Chinese Centre (Ho Ming Wah) and a small chapel.”

The Nero Impala granite access pavilion and light-well in Church Path are the only outward signs of the subterranean developments and now form striking architectural additions to the area in their own right. The access pavilion, visible from Trafalgar Square, is glazed above the granite and, with a lift and granite stairs, provides the fully accessible entrance to the new spaces below.

The light-well brings daylight and ventilation, and from its base gives a magnificent view of the restored church spire, which was part of Stonewest’s early work involving cleaning the Portland limestone of the church with the Doff steam and jos-TORC nebulous spray cleaning systems. Some poulticing was also required in particularly difficult areas.

Stonewest were responsible for the restoration of the walls, floors, columns, steps and paved areas throughout the church and its precinct, as well as making a significant contribution to the new buildings and being responsible for five subcontractors dealing with glazing, timber repairs, leadwork on the roofs and rainwater management, re-gilding of the weather vane and bird protection.

Setting out for the bush-hammered granite of the new-build pavilion and light-well that was cut and shaped in Spain presented a particular challenge to Stonewest because of the double-ellipse plan form of the structures. The pavilion base and light-well are each made from 24 granite sections weighing an average of 2.2tonnes, all uniquely shaped to account both for the shape of the structures and the fall in the paving. They sit on top of the openings without any physical fixings.

The light-well is a reflected image of the pavilion and within the well a matching granite fascia and soffit cover the inside edges of the concrete slab and are supported on stainless steel columns that sit on a granite base at the bottom of the well paved with granite setts. Engraved around the rim of the light-well is a specially commissioned poem by the Poet Laureate, Andrew Motion.

The re-opening of Church Path welcomes the public back to St Martin’s to see the results of what Sir William Whitfield said at the outset would be the most difficult project any of the contractors on-site would ever work on – and it involved 45 different contractors and 23 other consultants.

Stonewest have been on site from the outset and their impressive stone floors – which involved reclaiming the original stonework as well as providing new Purbeck and Blue Lias limestone as required – and spiral staircase to the Café in the Crypt played a significant part in the church gaining recognition as the best Church Restoration in the Georgian Group’s Awards last year.

On the exteriors, the work on the Portland stone of the building was largely a question of repairing damage caused by rusting iron dog cramps, some of them a metre long. More than 80 had to be removed to be replaced by threaded stainless steel. Ben Newman, Stonewest’s site foreman, estimates that there were around 350 individual stone indents required externally, all produced in the banker shops Stonewest had set up on site and in Costain’s yard in Erith. “There were big chunks of stone ready to fall off the capitals on the west front,” he told NSS. Often stone used for the indents was reclaimed from elsewhere on the site – such as the original Portland limestone stairway to the crypt that was removed to make way for the new access pavilion in Church Path.

As well as replacement stonework there were also mortar repairs made using NHL3.5 hydraulic lime from St Astier.

The scale of the underground works meant that most of the York stone paved areas around the church, including Church Path, and a variety of walls, plinths, steps and planters had to be removed. They were carefully photographed and catalogued before they were removed, just as the floors inside had been, so they could be restored off-site and returned for re-use.

The paving was, on average, 90mm thick in slabs 2m x 1m. The largest weighed 31/2tons. Where new York stone was needed Haslington from Farrars was used.

The steps at the main entrance of the west portico are Portland limestone. The whole staircase was catalogued and dismantled and then re-laid with repairs as necessary, but it had to be done in sections and the entire staircase was never available at any one time, which again presented setting out problems, especially with the rise of the site, because Stonewest were at no time able to refer to the whole aspect. “The whole job was a bit like that,” says Ben Newman.

And for those still wondering who the most prominent parishioner of St Martin-in-the-Fields is if it is not Prince Charles – it is the Queen.