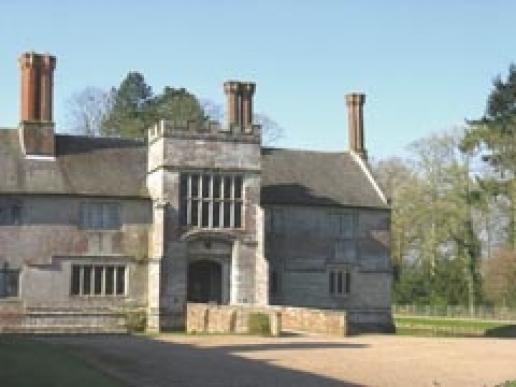 Warwickshire’s Forest of Arden is well-known to all Shakespeare lovers since it is the location for several of his plays. As an area of rolling hills and woodland glades it seems to epitomise all that is meant by rural England.

Nestling near streams are its villages and small towns, with their Anglo-Saxon and Norman churches built from large blocks of grey stone hewn from the very hills. Later came manor houses built of the same stone, as seen at Baddesley Clinton.

But unlike elsewhere in the county where there is stone of a good quality, the Arden sandstone is relatively soft and easily eroded. And as it weathers it can be seen to have a distinctive pattern reflecting the presence of both quartz and calcite grains along bedding planes.

In addition there is a telltale mauve algal growth that can be seen as an attractive patina to the stone.

This Arden sandstone occurs to the west of the county. Nearby, a quite different stone is exposed along the face of a wooded south-facing escarpment. This is the Wilmcote limestone – a stone commonly mistaken for the Blue Lias that occurs some distance away in the east of the county.

This, too, is not a good freestone and if mishandled can weather badly. But correctly used it is a durable and attractive building stone seen in houses, barns and walls.

We can see, then, the way that Medieval man in these parts of Warwickshire used to his own ends the stone that lay immediately beneath his feet, having first learnt how to exploit its potential and, where necessary, combine it with other stones for quoins and window tracery, all to good effect and adding to the charm.

We can further see how the master masons knew and understood ‘stress’, even before the scientific term was coined, as they traded skills and learnt how to construct buttresses, vaulted stone roofs and broach spires. They aspired to ever wider windows and ever more intricate tracery, using the most simple and basic scribing tools to mark their work out.

Medieval architecture can be seen at its best in the famous churches in Coventry and the castles at Kenilworth and Warwick, and one remains puzzled at the way Renaissance architects with their overweening sense of self importance coined the term ‘Gothic’ to heap abuse on Medieval masons and their accomplishments.

Within the city bounds of Coventry and nearby lay deposits of ancient desert sands now consolidated to the finest, intensely

rust-red freestone and with grades of the highest weather resistance, as witnessed by the spire of St Michael’s Cathedral, saved from the fires of the Blitz in World War 2 and still standing as fresh as the day it was constructed, whereas in the nave and chancel other stone is weathering less well.

As we cross the county to the eastern borders we encounter the Cotswold escarpment. Here we see another of Warwickshire’s famous stones, the Marlstone.

As the wealth of England increased during the Elizabethan years, so those in whose hands it was accumulating most moved away from the expanding cities to live in large country houses and surrounding estates.

Marlstone (more familiarly known as Hornton Stone) was readily available here beneath the sod and was easily dressed, providing a mellow yellow-ochre stone with hints of green.

Not only could large houses be built of it, but also the cottager’s homes and barns and even the walls of the fields.

We see examples in Upton House and Ashby St Ledger, although here, on closer inspection, we see that the stone is, in places, weathering badly and repairs will inevitably have to be carried out. Frost damage, wind erosion and rain have taken their toll and the lesser quality stone frequently used can be seen to be in a sorry state.

It is this concern for repairs that is increasingly engaging people’s minds, not only at local level but at national level and with the need to rationalise the problem, English Heritage set up the pilot scheme for the Strategic Stone Study to see the extent and nature of the problem.

To this end Warwickshire Geological Conservation Group was asked to offer advice on the stones in all the County’s heritage buildings and a small grant of £6,000 was given to the Group to cover the costs of carrying out the survey.

This work was undertaken and a report issued to English Heritage and the British Geological Survey (BGS), with the data being entered into a national database that will be used by the BGS to create a geographical information system (GIS) map. BGS say they hope to have the first results launched on their website by the end of this year.

Carrying out the survey was no simple undertaking, and it is not merely access to property and matching stone that is the problem. Many of our parish churches were specifically designed using different stones with various characteristics. Critical places such as quoins and buttresses were constructed of, say, Bromsgrove sandstone while the infill rubble walls used whatever stone was most readily available locally.

In churches with no local stone, all kinds of stones were carted from any convenient quarry, adding interest for the geologist but problems for the sensitive restorer.

And it is not only the engineering properties that need to be considered. There is an aesthetic aspect, a most dramatic example of which can be seen in Southam Parish church.

When it comes to repairs, there sometimes seems – and I may be wrong – a laissez-faire attitude of leaving the mason carrying out the work to select a stone and not to raise questions.

Certainly I suggest that some of Warwickshire’s building stones, such as the Arden sandstone and Hornton stone, cannot be matched by any other. They are unique to these parts of England and non-indigenous stone, despite matching in colour and grain size, will never afford the same, readily visible texture or weathering.

There surely needs be no hesitation in accessing local stone for local needs.

Even where crested newts have taken over a disused quarry there will be a plentiful supply of the same stone at a shallow depth just over the fence on the farmer’s land.

And there does not need to be residual disfigurement to the landscape after extracting the small amount of stone required for a project. The site can easily be restored. Or, with global warming in mind, a shallow hole in the ground might even make a valued water reservoir for the farmer.

Background to the Warwickshire study

Warwickshire Geological Conservation Group (WGCG) was selected by English Heritage to carry out one of the pilot studies in the Strategic Stone Study, an English Heritage project being carried out in conjunction with the British Geological Survey (BGS) to map all the uses and sources of stone in the heritage buildings of England and Wales.
English Heritage have committed £500,000 to the project over the next two years (although nobody realistically expects it be completed within two years) and it quickly became clear the budget was insufficient to employ people to carry out the mammoth task – hence the involvement of local geological groups who, in any case, already have much of the knowledge being collated by BGS.
The survey in Warwickshire was carried out throughout last year and into this by specialists in the WGCG and was satisfactorily completed earlier this year.
The Strategic Stone Study is a response to the Symonds Report on the stone industry in England and Wales commissioned by the Office of the Deputy Prime Minister and published in 2004. That report called for a national database identifying which stones from which quarries had been used in which buildings as an essential prerequisite of being able to plan for the future supply of those stones or suitable alternatives in order to maintain the built heritage of the country.
One of the drivers of the database is growing concern at the loss of sources of original stone and the sometimes indiscriminate use of quite different stone since all the quarries that formerly supplied the original materials have shut down.
Warwickshire has a varied range of stones used in its castles, churches and bridges, which made it an interesting place for a pilot in the Strategic Stone Study.
Many of the stones used in these buildings have weathered quite severely, so finding replacements is important. By the same token, these stones have unique aesthetic features that mean alternative stones used for replacement stand out in a manner often considered to be disfiguring.
It is hoped the Strategic Stone Study might be able to identify sources of matching stones that could be exploited for conservation and appropriate matching new build projects.

Warwickshire Geological Conservation Group was formed in 1990 as an offshoot of Warwickshire Wildlife Trust, of which it remains a constituent. It was started by a few enthusiasts who wanted to raise awareness of and conserve the many rock exposures that are dotted around the county.
The membership has since grown and includes many enthusiastic amateurs, students and teachers as well as some professional geologists. The two major aims of the Group have always been: