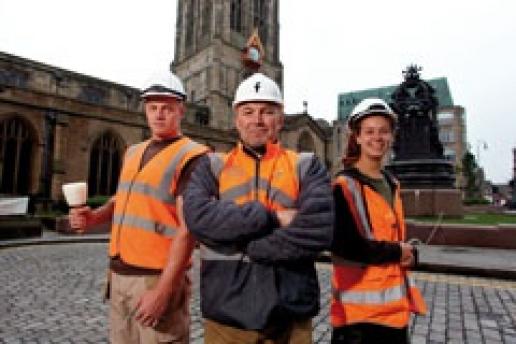 After winning this year’s RICS Award for Building Conservation for The Black Barn in Northumberland, Team Force Restoration, based in Blyth, Northumberland, is now working on a careful masonry consolidation programme on 250m2 of the sandstone walls of the Palladian style Thomlinson Library to St Nicholas Cathedral in Newcastle.

The restoration work has been made possible by a £150,000 grant from the First World War Centenary Cathedral Repairs Fund – which is money from the government administered by the Archbishop’s Council.

Team Force Restoration has just spent four years restoring Seaton Delaval Hall in Northumberland for the National Trust and has carried out award-winning conservation work on Lindisfarne Priory for Historic England (previously English Heritage), as well as winning numerous heritage awards for its work on more than 250 of Britain’s most valued historical and ecclesiastical buildings.

At St Nicholas Cathedral, hundreds of huge sandstone slabs are being carefully descaled and cleaned ready to be repointed with lime mortar to conserve them for future generations.

The first church on the site of St Nicholas Cathedral was built in the late 11th century in wood. The current building was erected towards the end of the 12th century following a fire. It has twice been damaged by fire itself, but was repaired and extended and by the end of the 15th century had the stone crown and tower seen there today.

The Tomlinson Library was added in 1736 by the renowned architect James Gibbs to house an important collection of books and manuscripts.

Heading the current restoration work is architect Purcell, which commissioned Team Force Restoration to carry out the work.