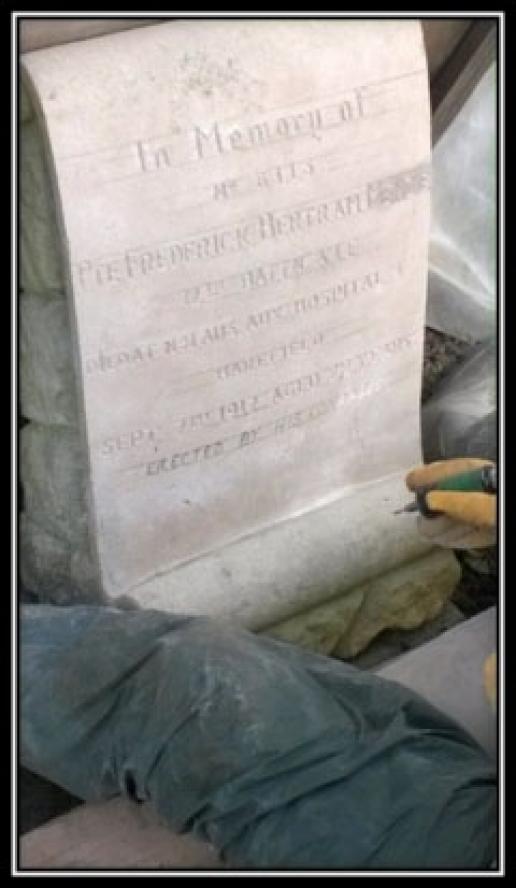 The Portland limestone and marble headstones of more than 100 Australian servicemen who died during the First World War have been restored ahead of the Centenary of ANZAC Day on 25 April by the Commonwealth War Graves Commission (CWGC).

Observed on the same day each year, Anzac Day was originally to honour the members of the Australian and New Zealand Army Corps (ANZAC) who fought at Gallipoli against the Ottoman Empire during World War I.

The restored graves are at Harefield (St Mary) Churchyard, near London. They have a scroll design that is unique among Commonwealth War Graves memorials. It was chosen by ANZAC patients brought to Harefield’s war hospital (Australian Auxiliary Hospital 1) for treatment of injuries and illness sustained during fighting in Europe and North Africa in World War I.

The headstones have been re-engraved by teams of skilled CWGC stonemasons.

The annual ANZAC Day service, which started in 1921, involves local children, who lay flowers on every grave.

This year a new visitor information panel will be unveiled following the service. The panel uses smartphone technology to reveal the personal stories of some of the men buried at the cemetery.

Three months after the outbreak of the First World War, Mr and Mrs Charles Billyard-Leake, a wealthy Australian couple living in Britain, offered the use of Harefield Park and its extensive grounds to the Minister of Defence in Melbourne. It was to be a convalescent home for wounded soldiers of the Australian Imperial Force (AIF). The Commonwealth Defence Department accepted the offer and the house was converted into an establishment fit to accommodate 50 convalescing soldiers in the winter, and up to 150 in the spring and summer.

Harefield was staffed by members of the Australian Army Medical Corps (AAMC), along with a strong contingent of volunteers from Mrs Billyard-Leake’s circle who organised the canteen, ran entertainment for recovering patients and offered the use of their cars for trips. It had two purposes: a rest home for officers and other ranks, and a depot for soldiers who were invalided and due to be sent back to Australia.

Over the following months, Harefield House developed into No. 1 Australian Auxiliary Hospital. After opening in June 1915 and receiving patients from Gallipoli, it became clear that the accommodation at the hospital would have to be expanded to accommodate increasing numbers of sick and wounded Australian servicemen. By the end of the first month, there were 170 patients and extra huts had to be built. Two months later there were 362 patients, and by November 1916 the hospital was functioning as a general hospital with an operating theatre, an X-ray department and specialists in eye, ear, nose and throat conditions. By now there were 1,000 beds and the hospital occupied nearly 50 buildings around the estate, including ward huts, garages, recreation rooms and a mortuary.

Of some 50,000 patients treated at Harefield, 112 did not recover. These men, and one female nurse, were buried here in the parish churchyard. Francis Newdegate, a local MP whose family had long connections in the village and who was later knighted and appointed Governor of Tasmania, offered a plot of land next to the churchyard to extend the cemetery. He also covered the funeral expenses for all the burials. The village school lent its Union Flag for these occasions.

In 1921 began the annual ceremony in which the children from the school put flowers on every grave in the cemetery.

The headstones, which are of a design unique among Commonwealth War Graves Commission (CWGC) cemeteries, were chosen by the staff and patients at the hospital. They were created before the end of the war, thus predating the standard CWGC design used from the 1920s to the present day.

An obelisk that stands among the headstones was donated by Sir Francis Newdegate and Mr Billyard-Leake in honour of those Australians who died at Harefield.