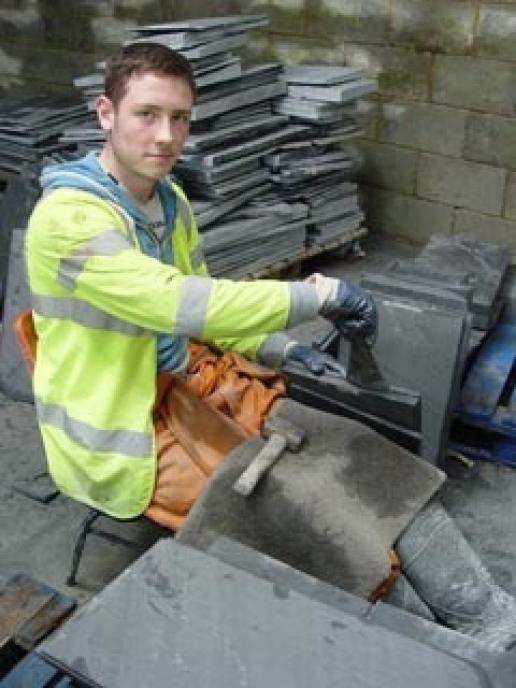 Welsh Slate, for which UNESCO World Heritage status is already being sought, might also be designated as a Global Heritage Stone Resource along with Portland Limestone and perhaps other important stones in the UK.

The International Association of Engineering Geologists has proposed the formal recognition of selected important stones as Global Heritage Stone Resources.

This initiative is being co-ordinated and developed by Barry Cooper at the University of South Australia, Adelaide, and is supported in the UK by the English Stone Forum and the Welsh Stone Forum.

Draft citation criteria have been circulated to interested organisations and individuals and English Stone Forum has commented on these. As a trial of the citation process a draft proposal for Portland stone has been produced and it is planned that Welsh slate should also be considered.

The Global Heritage Stone Resource (GHSR) proposal seeks to raise the status of building stone, especially in the international sphere, in the realm of geologists, for other natural stone professionals and for the stone industry sector in general. It aims to create an internationally recognised category for those natural stone resources that have achieved widespread utilisation in human culture.

The aim would be to ensure that sources of important building (dimensional) stone do not become sterilised. The land would be protected from other development so that the resource would remain available into the future.

The International Association of Engineering Geologists says its Global Heritage Stone Resource designation would be separate from World Heritage status granted under the 1972 UNESCO (United Nations Educational, Scientific, & Cultural Organization) Convention concerning the Protection of World Cultural and Natural Heritage and the work of its World Heritage Committee. Neither would it conflict with regional, national or international standards or schemes.

The proposal has met with more enthusiasm from the Slate Quarries Association in Wales than the proposal by Gwynedd Council to gain UNESCO World Heritage status for parts of the Welsh slate industry because those running active slate businesses are concerned about added restrictions on operations of quarries considered World Heritage Sites.

Becoming a Global Heritage Stone Resource, on the other hand, could make life easier for quarry and mine operators by gaining them a presumption in favour of continued production when making planning applications for extending quarries and processing operations.

But it is all well into the future. It could easily be another five-to-10 years before Gwynedd's application to turn the slate industry into a World Heritage Site is decided. And the Global Heritage Stone Resource designation is still in the formative stage.

You can find out more about the Global Heritage Stone Resource proposal and follow its progress on the English Stone Forum website www.englishstone.org.uk

You can also read what the BBC has had to say about the proposal to designate Welsh slate as a Global Heritage Stone Resource by clicking here.