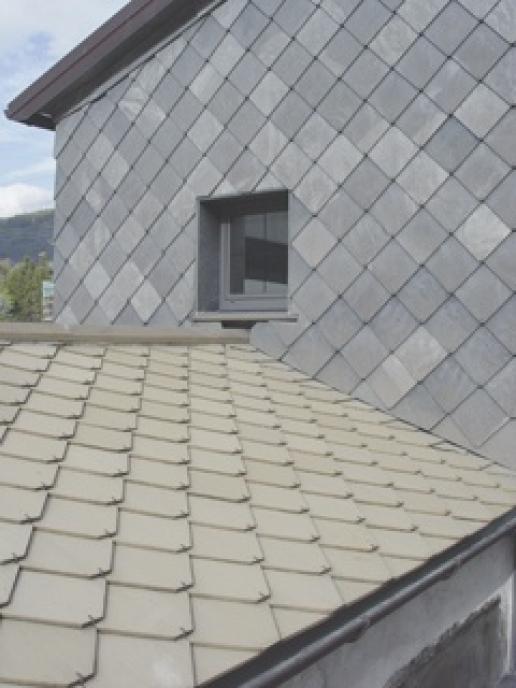 When houses are roofed with slate that does not achieve A1 S1 T1 test results the outcome can be plain enough to see with the roof rapidly changing colour. It has led the NHBC to say in order for it to give its guarantee it wants A1 S1 T1 slates to be used.

It is beginning to dawn on people that a CE mark does not say much about the quality of the product that carries it. It is certainly not the equivalent of the British Standard Kite Mark, which is why the National House Building Council (NHBC) issued its own requirements for roofing slate specification this time last year.

This magazine’s Ask the Expert columnist, Barry Hunt, who has had a lot of involvement with roofing slates from all over the world, says: “Basically the NHBC now believes that only slates with A1, S1 and T1 classification should be used, which I fully agree with.

“This will come as somewhat of a shock to some slate suppliers who are importing large quantities of T2 grade material to the UK market that is then leading to widespread disappointment.”

Part of the problem is the new European standard EN 12326, ensconced in English standards as BS EN 12326.

Terry Hughes of the Stone Roofing Association sits on the European Committee determining the standards for roofing slate. He says: “We are beginning to do what we put on one side 17 years ago, although 17 years later we’re still arguing about it.”

There are some fundamental differences even about what constitutes slate with European producers challenging materials coming from Brazil and Scandinavia.

EN 12326 currently has part one, the product standard, and part two, the test methods. The intention now is to make as many parts as are necessary to cover all the materials being used as roofing slate.

“Different stones have different modes of failure and you have to know what they are so you can test for them,” says Terry.

Terry has recently been working on a document for the National Federation of Roofing Contractors, which is basically the same as the NHBC document, although it accepts the use of T2 slates as long as they carry the warning that there will be brown staining that could effect the value of the property.

The European product standards state which tests have to be carried out in order for the product to carry the CE mark, but the CE mark says little more than that the product has been tested. It is up to the purchaser of the product to interpret the results.

If the CE test results show a slate is T2 and CE mark supporting documentation correctly shows that, there will be no comeback on the company that supplied the slate if it discolours or fails.

If a T2 roof costs £10,000, a T1 roof might cost £12,000, which, as an overall proportion of the finished building, seems a small extra price to pay for a happy customer and peace of mind.

Barry Hunt says: “In many instances people fool themselves into thinking they are saving a lot of money, but considering the life span of the slate it is a false economy. Failures don’t do the industry any favours.”

The colour of some slates lightens in a short period because of their carbonate content. This has caused some alarm on projects, although suppliers have now discovered they can turn the feature to their advantage by describing the slates as ‘rustic’ or ‘antique’. But if slates do not carry a guarantee of longevity this should act as a warning.

Carbonate slates are easy to identify – drop acid on them and they fizz. And the more carbonate there is, the more they will dissolve in use and the thicker they need to be when they are laid to overcome the problem.

Terry Hughes has also written a guide to using hooks for roofing, which amends the previous recommendation of using Stainless Steel 304 or 316 and says 316 should always be used. This is the result of problems on the South Coast where the salt from the sea has caused rusting. But rather than try to define under what conditions it is acceptable to use 304 steel, it is simpler just to use 316 all the time, especially as it makes virtually no difference to the cost.