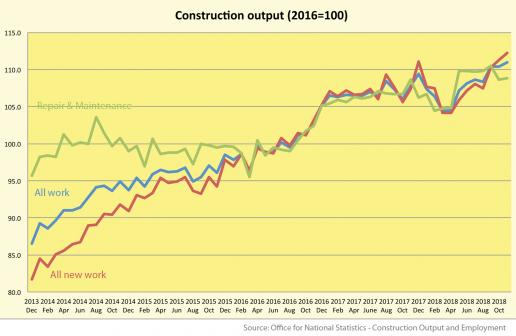 Monthly construction output 2013-2018. Output reached a new all time high in November to break through the £14billion mark.

Construction output reached a new all-time record high in November to break through the £14billion barrier for the first time.

Figures released today (11 January) by the Office for National Statistics show output in November grew 0.6% compared with the previous month.

This has resulted in a record high output of £14.042billion worth of work, which represents 28.7% growth in construction output over the past five years.

Output also reached a new high in the rolling three-month series, which grew 2.1% relative to the previous rolling three-months to the end of October 2018. It was driven by new work, which increased by 3.4%, although it was offset slightly by a decline of 0.4% in repair & maintenance. New housing and infrastructure led the way, increasing by 4.9% and 6.5%, respectively. However, compared with October, infrastructure output was down 2.5% and other public work output was down 5.8% in November.