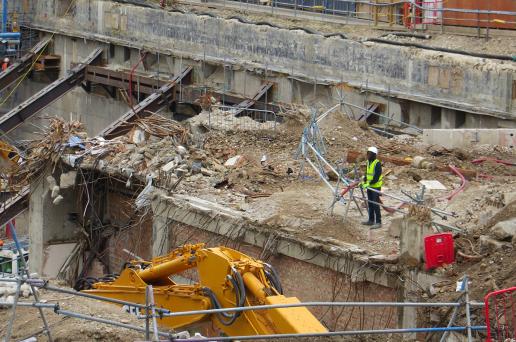 Arrests follow CITB raids on HS&E test centres. Staff are suspected of taking money for giving candidates, some illegal immigrants in modern slavery, the right answers to enable them to work on UK construction sites.

Three men involved in the delivery of CITB HS&E tests have been arrested for Fraud Act offences. They are suspected of taking money in order to supply the right answers to candidates, including illegal immigrants, taking the test to enable them to work on British construction sites.

Seven construction workers have also been detained on suspicion of working in Britain illegally.

The arrests and detentions followed unannounced counter-fraud visits by CITB, police and the Home Office.

CITB audits of health, safety & environment (HS&E) test centres in Cheshire, Essex and London in recent weeks are believed to have identified staff giving the answers to candidates, some suspected of working in the UK illegally.

Some staff are said to have admitted being paid to give the right answers to candidates during the test and some candidates said they had paid up to £500 to take the £21 HS&E test.

In London, the Metropolitan Police, supported by CITB investigators, arrested a man suspected of facilitating corrupt tests for other candidates. A quantity of fake documentation and card making equipment was seized from a number of locations.

CITB will now review just over 2,500 tests conducted by these centres in the past year and decide whether or not to revoke them.

Ian Sidney, CITB Fraud Manager, said: “CITB has considerable experience in auditing test centres all over the country, and works with the Home Office, police and other law enforcement agencies where necessary on behalf of the construction industry to ensure a safe working environment for all.”

If anyone has information about fraudulent testing in construction they can contact CITB anonymously on [email protected].

Organised crime gangs are said to be able to earn £50,000 a week through illegal immigration and modern slavery networks, with far less risk than drug or gun crime.

For example, during an unrelated joint visit by police with CITB earlier this year, £500,000-worth of assets were seized.

Some workers arrive in the UK legally but are duped into thinking that the cards or qualifications they require are impossible for them to obtain and that expensive counterfeit versions are their only option.

There are also those who are trafficked illegally, with fraudulent cards in a package awaiting them on arrival. They are made to believe they remain in debt indefinitely to a gangmaster.

So far in 2019 CITB has terminated 17 test centres involved in the delivery of fraudulent tests or CITB qualifications.

CITB supports the police and the Home Office concerning fraudulent card use, which has been found to be involved in cases of illegal immigration and modern slavery. CITB says it recently assisted during an operation at Battersea Power Station.

Find out more about the process for reporting suspected card fraud and how it is investigated by CITB here.