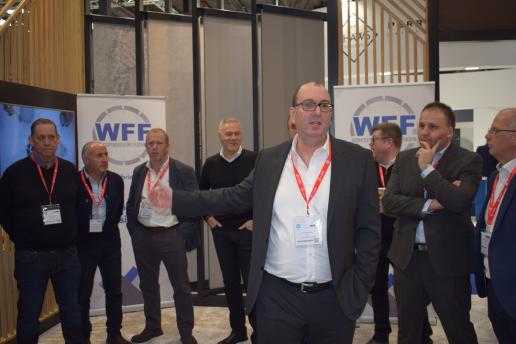 The official launch of the Worktop Fabricators Federation at KBB in Birmingham on Monday, 2 March. The launch took place on sponsor Caesarstone's stand, where Amir Riske, CEO of Caesarstone UK, is pictured congratulating the founders of the organisation on their initiative. Behind him are the founders and other sponsors of the new Federation.

The new Worktop Fabricators Federation was officially launched on the stand of one of its sponsors, Caesarstone, at the KBB exhibition at the NEC, Birmingham, today (2 March).

Amir Reske, CEO of Caesarstone UK, is pictured here saying a few words of encouragement to the new organisation. Behind him are the founders of the organisation and representatives of other supporters - you might recognise some of them.

The founders spoke about their objectives in Natural Stone Specialist magazine at the start of this year (read what they said here).

Chris Pateman has been appointed as General Secretary of the organisation. He can be contacted at [email protected] / 07366 391105. 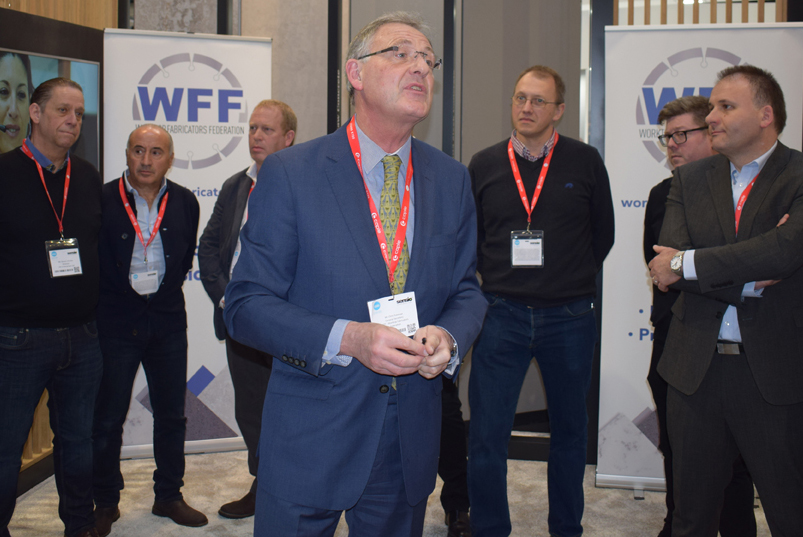 As the market for high quality, high value kitchen worktops continues to grow and develop, the new Worktop Fabricators Federation offers kitchen companies a new means of demonstrating their involvement with professional, reputable fabricators, committed to the highest industry standards.

The Worktop Fabricators Federation, officially launched today (March 2) is an association BY the industry, FOR the industry. The brainchild of a group of five successful independent fabricators, WFF was created to bolster industry standards, encourage greater dialogue between businesses and pool experiences to deliver consistently excellent service.

“Designing, templating, creating and fitting stone worktops is an exacting and professional business,” says WFF founding director Mark Mills.  “As the market has grown and matured, so installers have increasingly become concerned at the sometimes costly consequences of dealing with untried suppliers. Customers are increasingly demanding about the quality of the goods and services supplied by kitchen companies.  They want to know that all trades involved in their projects are capable, professional and reliable.  And the worktop industry needs to provide its clients the Kitchen Companies with the very best service they can.

“WFF aims to do everything it can to capture and develop the professionalism of our industry – giving both customers and investors confidence that in dealing with a WFF member they are getting the very best product and the best service.”

The WFF’s quality ambitions have already struck a responsive chord with major industry suppliers, keen to encourage an installer base which can maintain the stone worktop sector’s high-quality, high fashion reputation.  Founding Sponsors of the WFF are ASM Supplies, Caesarstone, Cosentino, Neolith, Roccia and Stonegate Tooling.

“We’re obviously delighted with the depth of support we’ve received from suppliers,” says Mark Mills. “Our industry’s really come of age now, and it’s time for us, as professional fabricators, to ensure we maintain its reputation and its premium position with our customers.  We encourage everyone who’s serious about the future of stone worktops to get in touch via our website and work together with us to shape the professionalism and the future of our trade."

Below. The founders of the Worktop Fabricators Federation with Cosentino UK Director Paul Gidley. In the picture (left to right) are: Andy Phillips, Paul Gidley, Mem Zekayl, Mark Mills and Simon Souter. 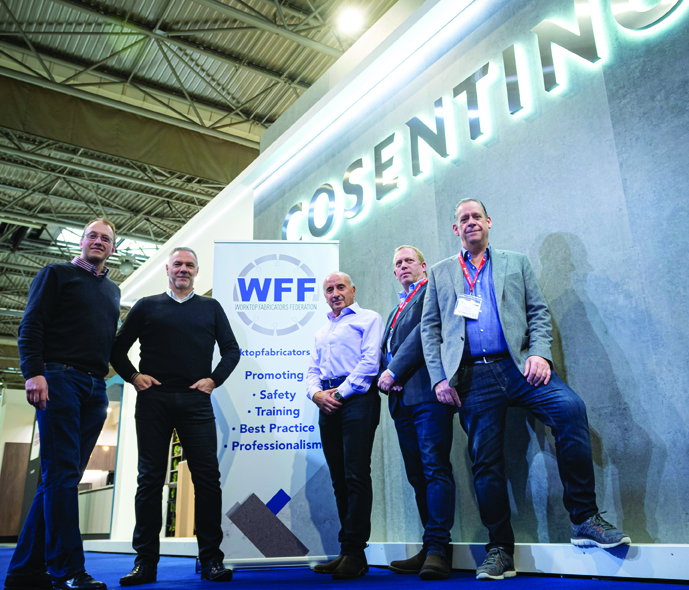