£13,933 – company and director contest size of penalty for using NAMM logo when they were not members 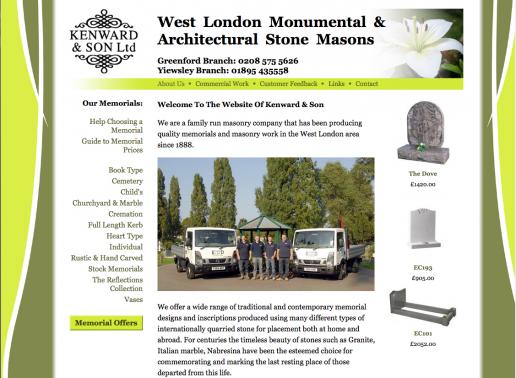 The Kenward & Son website and shops no longer display the NAMM logo.

A West London masonry company and a director convicted of using the National Association of Memorial Masons (NAMM) logo when the company was not a member are appealing against the size of the penalty given by a magistrates' court in April.

The company is Kenward & Son Ltd, with outlets in Greenford and Yiewsley, West London. The director is Nicholas Batt. They were fined £5,000 each for the offences. They were also ordered to pay £1,859 in compensation to an aggrieved party plus prosecution costs of £1,954 and a victim surcharge of £120.

Both the company and director had pleaded guilty at a hearing by Ealing Magistrates on 21 April to eight offences relating to trading practices under consumer protection legislation.

Ealing Council brought the prosecution following an investigation which established the company had falsely claimed membership of NAMM both at its premises and on its website.

Action was taken following a complaint about a disputed inscription on a family headstone and false claims relating to the consumer protection available to the victim.

The Council said Kenward & Son had been commissioned to work on a family memorial based on their claim to NAMM affiliation by means of two large logos prominently positioned on the front of the company's shop. But the inscription was considered by the client to be of such poor workmanship that they complained and asked the company to refer the resulting dispute to NAMM for arbitration under the organisation's membership rules.

It was at this point the company admitted it was not a member of NAMM. Trading Standards found that, contrary to claims at the shop and on the company website, Kenward & Son had not been a member of NAMM since 2010. The company has since removed the logos and a statement about its membership.

Cllr Ranjit Dheer, the Council's Cabinet Member for safety, culture and community services, said: “This outcome is an excellent example of the council’s work to protect consumers and tackle unscrupulous traders and unfair commercial practices in Ealing. Kenward & Son misled the victim from the start, intensifying their grief and vulnerability at a time when they warranted compassion and understanding. We are committed to making the borough a safer and fairer place for everyone and will take strong action against local businesses that break the law.”

Phil Potts, NAMM’s National Executive Officer, said: “We support and welcome this robust action by Ealing Council. NAMM membership gives the public and individuals, at a time when they are most vulnerable, a quality assurance about its member masons. A consumer entrusting a NAMM member gains many benefits and protection beyond the minimum legal requirements.

“The misuse of our logo to falsely claim affiliation harms both consumers and our legitimate professional members. We encourage anyone affected by or aware of such malpractices to report the matter to trading standards and NAMM.”

The appeal against the size of the penalty by Kenward & Son and the company director will be reviewed by the Crown Court this month (June).