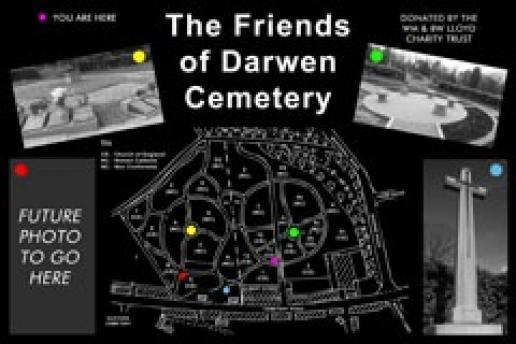 Two Indian black granite plaques mapping out the position of the graves at Darwen Cemetery in Lancashire are helping to guide mourners to their plots, thanks to memorial company Brent Stevenson Memorials based in Blackburn and Blackpool.

The delicate detailing of the maps, with letters and numbers identifying the plots and including pictures of some of the memorials in the cemetery, would not have been possible to achieve by sandblasting. But Brent Stevenson Memorials used a diamond impact etcher for the job.

The company believes it was the first masonry business in the country to buy a diamond impact etching machine from the Canadian manufacturers, Impact Etching, when it invested in it more than three years ago – although the machines are now more conveniently available from The Blast Shop in Manchester. Using the diamond tipped impact etcher a realistic picture can be reproduced from a photograph on to a memorial stone.

The maps were commissioned by Friends of Darwen Cemetery using a grant of £1,000 from the Lloyd Trust. They wanted two maps so they could be positioned at each of the two main entrances to the cemetery.

A space has been left on each of the maps for a picture of a First World War memorial to be added once the memorial has been made and installed in the cemetery ready to commemorate the start of World War I in July.

John East of Friends of Darwen Cemetery says there has been a significant increase in the number people looking for family graves in recent years and more of the memorials are being repaired and cared for.

The Friends have regular working parties and have been responsible for a lot of renovation and reclamation work in the cemetery, which in itself has encouraged more people to visit. John East says anyone wanting to locate a grave can now ring the borough council to find out where it is then use the map to identify its position in the cemetery.