Chilmark memorial to teenager killed by a polar bear 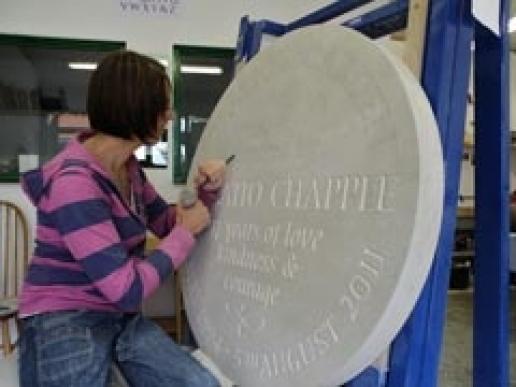 Stonecarver Robyn Golden-Hann has hand-cut a Chilmark limestone memorial stone for Horatio’s Garden – a garden at Salisbury hospital named after the 17-year-old killed by a polar bear while on an expedition to Svalbard, Norway, last year.

The garden is at the Duke of Cornwall Spinal Treatment Centre. It is for patients and their families helping in their rehabilitation after spinal injuries. It offers an engaging and inspiring focus for those facing the devastation of life changing spinal injuries.

This beautiful and lasting tribute to Horatio Chapple was fashioned by Robyn in close collaboration with Horatio’s parents. Horatio was a volunteer at the spinal centre in his school holidays and was inspired by the patients to study medicine. Horatio’s father, David Chapple, is Consultant Spinal Surgeon at the spinal centre.

Horatio conducted a research project into the needs of patients that identified the benefits the garden would bring. He found that patients wanted to be outside in the fresh air, away from the hospital ward – somewhere they could be with friends and relatives.

The memorial to Horatio is set in the centre of the garden. The cream coloured Chilmark limestone used is also being used for the on-going restoration of Salisbury Cathedral and other major historical buildings in the area.

Robyn was delighted to be able to source the stone through Salisbury Cathedral and worked closely with the Cathedral’s stone sawyer, Gary Price, who was invaluable in helping her to select and the stone. He cut it to size for her at the Cathedral.

The inscription reads: ’17 years of love, kindness and courage’.

Robyn says: “Each memorial I have the honour of working on has great emotive quality. It is not just about giving information but is usually required to reflect the character or personality of the person it represents. I have to carefully consider its final setting and ensure the two work well together. I am delighted with the final design of Horatio’s memorial stone which works beautifully in its current setting, providing a natural, harmonious addition to a unique garden.”

She adds that lettercutting in stone is like handwriting. “The letters develop a natural rhythm, creating subtleties that give the stone a voice – make it sing. The light captures these nuances and throws the letters into relief, where they seem to float out of the stone.”

Cleve West, who has won ‘Best in Show’ at Chelsea for the past two years, designed the garden. It includes stone walls in the shape of a spinal column as a central theme curving through mixed planting. The walls double as seating. Paths around the garden are wide enough for hospital beds and wheelchairs and there is a central gathering space.