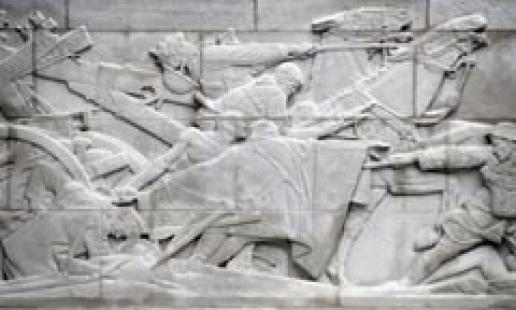 When the Portland limestone Royal Artillery Memorial was first unveiled its depiction of the realities of war were shocking. Today it is considered one of the country’s great public artworks. DBRâ€ˆhave been helping to make sure it remains so.

The Portland limestone Royal Artillery Memorial at Hyde Park Corner, London, is one of Britain’s great public sculptures. And it was looking its best for Armistice Day and Remembrance Sunday this year having just been cleaned by stone and conservation specialists DBR, working with English Heritage, thanks to a grant from the charitable Bulldog Trust.

In 1999 English Heritage assumed responsibility for the care and maintenance of 47 statues and monuments in central London, including the Royal Artillery Memorial. Others include the Cenotaph, Marble Arch and Wellington Arch.

Being on busy Hyde Park Corner, pollution and the elements had taken their toll on the Royal Artillery Memorial, built to commemorate those Gunners who died in World War One. Green algal growth was the biggest problem, exacerbated by the overhanging plane trees. Together with the traffic fumes, it had discoloured the monument, while rain had penetrated the stonework, causing the joints to crack.

Over the past two months, the monument has been shrouded in scaffolding while the stone was carefully cleaned. Using Restorative Techniques’ ThermaTech superheated water cleaning system the brightness of the Portland stone with its carved panels depicting life in the Royal Artillery in the First World War was recovered from the grime.

The superheated water effectively removed the carbon-based and organic incursions and â€ˆthe stone was treated with Tensid Algo Bio Inhibitor to protect it from further algal growth. English Heritage are currently evaluating another Tensid product, a water repellant, to see if it would be appropriate to use it to protect the stone and inhibit future growth of algae.

The joints have all been meticulously re-pointed using hydraulic lime mortar and a shelter coat of lime with silver sand and Portland stone dust has been added to protect the relief carvings from corrosion. The bronze statues were covered in protective coats of wax.

After the remembrance ceremonies, DBRâ€ˆreturned to the memorial for another two weeks to remove and re-lay the paving and steps that had become uneven over the years.

The Royal Artillery Memorial is dedicated to the 49,076 men of the Royal Regiment of Artillery who died in the First World War.

Described by architectural historian Nikolaus Pevsner as a “masterpiece of British 20th century sculpture”, the monument, erected in 1925, was designed by the sculptor Charles Sargeant Jagger working with the architect Lionel Pearson. Jagger had served in the First World War and his work offers an uncompromising and unsentimental depiction of the reality of life and death on the battlefield.

The memorial comprises an enormous sculpture of a huge cannon on a large plinth, with reliefs carved into the panels of the plinth containing scenes from the First World War. An inscription records the countries in which the gunners fought. Around its pedestal stand three bronze statues of gunners while a fourth lies dead under his cape and helmet with the inscription (from Shakespeare’s Henry V), ‘Here Was A Royal Fellowship of Death’.

Jagger’s realistic designs for the memorial were initially criticised, particularly his bronze of a dead soldier and the massive stone cannon that some critics considered to be ugly and over-sized.

However, the members of the Royal Artillery War Commemoration Fund, which had commissioned Jagger’s design, approved his decisions and expressed themselves entirely satisfied with the finished memorial, as did many veterans of the war.

The memorial is now widely regarded as a masterpiece and, along with the Cenotaph, one of the most evocative war memorials in the country.

A guide to cleaning from the Stone Federation

Stone Federation has produced a Guide to Best Practice on the Cleaning of Internal and External Masonry Surfaces. It sets a recognised standard of best practice for the industry.

The cleaning of stonework is no simple matter. There are many different causes of the soiling of stone and there are special considerations which call for a high degree of expertise in all elements and at all stages of cleaning it.

In the past, smoke from the burning of coal caused the most obvious soiling of buildings. Today it is vehicle exhausts and acid rain that are mainly responsible, although as pollution in the atmosphere is reducing, discolouration resulting from algal growth is increasing.

Studies have shown there can be advantages to cleaning stone on a regular basis.

This Stone Federation Guide is concerned with the cleaning of natural stone, not least on the buildings and monuments that make such an important contribution to the architectural heritage of the country.

Stone is one of the most durable of all building materials and compares favourably from an economic point of view, especially when maintenance and whole life costs are taken into account. From an aesthetic point of view it is in a class of its own.

Nevertheless, proper maintenance is essential. If it is carried out periodically with suitable skill and understanding, the greater will be the environmental and practical advantages in the preservation of the structure.

What must be stressed, however, is that in the wrong hands and with the use of the wrong processes for the stone in question, much harm can be caused, with unsightly effects resulting, some only becoming apparent months after the cleaning has been completed. They can be difficult, if not impossible, to remedy.

This Guide contains useful advice but cannot be definitive. Every project is unique and the Guide needs to be used in conjunction with the experience and knowledge of an expert stonemason or masonry cleaner. In the wrong hands, physical and chemical cleaning systems can damage the fabric of a structure being cleaned. It is essential that cleaning should always be carried out by trained operatives.

Copies of the Guide cost £20 (£15 to Stone Federation members) and are available from the Federation (see page 43 for Federation contact details).

Stonehealth regard the removal of any unwanted matter from any building surface, including paint, as a cleaning process. Stonehealth were formed back in the mid 1980s and introduced the Jos gentle abrasive cleaning system into the UK. Since then Stonehealth have replaced Jos with the Torc system that they introduced and now manufacture. It gently removes carbon sulphation, lime and cementitious-based paints and limescale from virtually any building material.

They have also introduced the Doff system, which cleans using super-heated water at 150ºC. It complements the Torc system and was introduced to remove most types of oil based and plastic paints – again, extremely gently.

Doff is also ideal for the removal of biological growth as the surface is sterilised and spores killed off. It has been found that surfaces cleaned with Doff at 150ºC will remain free from biological growth for longer than when hazardous biocides alone are used.

At Stonehealth, painted surfaces are always considered as suspicious as once the coatings are removed it is frequently found that the paint has been used to hide some unpleasant matter (such as a build up of carbon pollution on the surface of stone) or botched repairs.

Paint can seem to be the easy answer. But paints – even those for which vapour permeability is claimed – have been found to trap moisture and salts in masonry, which accelerates surface decay. Once paint is removed it is often discovered that it was all that was holding together what has become a friable surface underneath. And multiple layers of paint develop into a blur as successive layers gradually fill voids and hide fine details of carvings.

Examples of these problems are illustrated in the pictures here of a limestone frieze on a large private property in Bristol. The picture at the top shows the painted frieze. In the middle, the paint has started to be removed, revealing the detail of the carving underneath that had been obscured by layers of paint. The bottom picture shows how friable some of the stone has become as a result of the paint trapping moisture in the stone.

Site safety is a priority with ThermaTech

The ThermaTech superheated water system used to clean the Royal Artillery Memorial (see main story) is one of the products introduced by cleaning product specialists Restorative Techniques. It has two features recognised as key distinct advantages by specifiers and users, say the company.

One is the demountable fuel tank. It means the unit can be left unattended on scaffolding, saving time at the beginning and end of the working day, without also leaving the fuel there. It also makes refilling the fuel tank easy. Even on the most tightly regulated sites, ThermaTech meets best practice standards of fuel handling.

The other is the red colour of the twin wired, high pressure hot hoses. The colour is not cosmetic. It gives a clear visual indication that the hose is designed for heat and could be hot – so don’t touch it! It also avoids the use of an inappropriate hose, not designed to take the heat and pressure, that could fail and spray scalding water on the operator or anyone else in the vicinity.

Called Ibix, the equipment works at pressures of

0.2-7bar and can be precisely controlled by the operator to control abrasive material output. Many different types of media can be used, including calcium carbonate, fine garnet and sodium bicarbonate.

Models are available with 9litre and 25litre media hoppers in dry-blasting or wet-blasting versions. The H2O models allow low-pressure wet-blasting using atomised water mixed with abrasive directly at the nozzle.