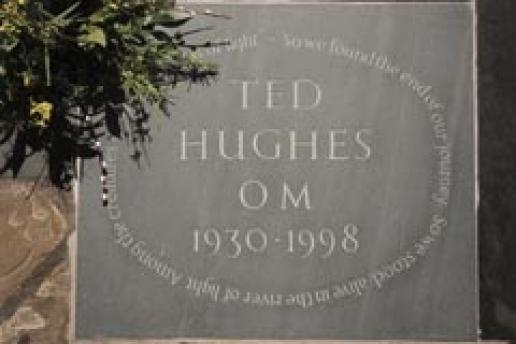 At 78, Devon lettercutter Ronald Parsons, says inscribing the memorial to Poet Laureate Ted Hughes that was dedicated in Westminster Abbey this month (6 December), was one of the highlights of his career.

He was commissioned by the poet’s widow, Carol Hughes, to inscribe the plaque of Kirkstone slate from Cumbria that has now been installed in the floor of Poets Corner at the foot of the memorial to T S Eliot, Hughes’ mentor and a director of his publishers, Faber and Faber. It is in the company of memorials commemorating more of the country’s greatest poets, including Chaucer and Shakespeare.

The Exmouth-born designer and lettercutter says he inscribed the slab of Kirkstone slate while listening to a recording of verse by the former Poet Laureate, who lived in Devon for 30 years until his death in 1998.

The inscription records the name of the poet and round the edge includes part of his poem That Morning, about a day when he stood in an Alaskan stream as a shoal of salmon flickered by.

Ronald Parsons, who designs and carves stone in his home workshop in Exeter, told reporters: “I have been thinking about retiring for a long time, but my wife, who is in a nursing home, said ‘you must do this’. It’s nice to finish on a high.” He described it as “an interesting project” and said it was “a funny sensation listening to his poetry while carving his memorial.”