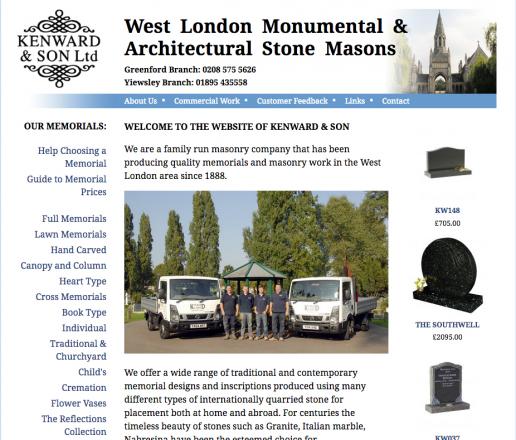 The NAMM logo disappeared from the Kenward & Son shops and website when the company was charged with using it illegally because it was not a member of NAMM.

Memorial masonry company Kenward & Son Ltd, with outlets in Greenford and Yiewsley, West London, and Director Nicholas Batt have had fines imposed on them for using the NAMM logo when they were not members of the National Association of Memorial Masons (NAMM) reduced on appeal.

They had been fined a total of £5,000 each for a number of offences. They were also ordered to pay £1,859 in compensation to an aggrieved party, who claimed to have chosen the company because of the protection NAMM membership offered, plus prosecution costs of £1,954 and a victim surcharge of £120.

Both the company and director pleaded guilty at a hearing by Ealing Magistrates on 21 April to eight offences brought by Ealing Council's Trading Standards Officers relating to trading practices under consumer protection legislation but afterwards appealed against the severity of the fines.