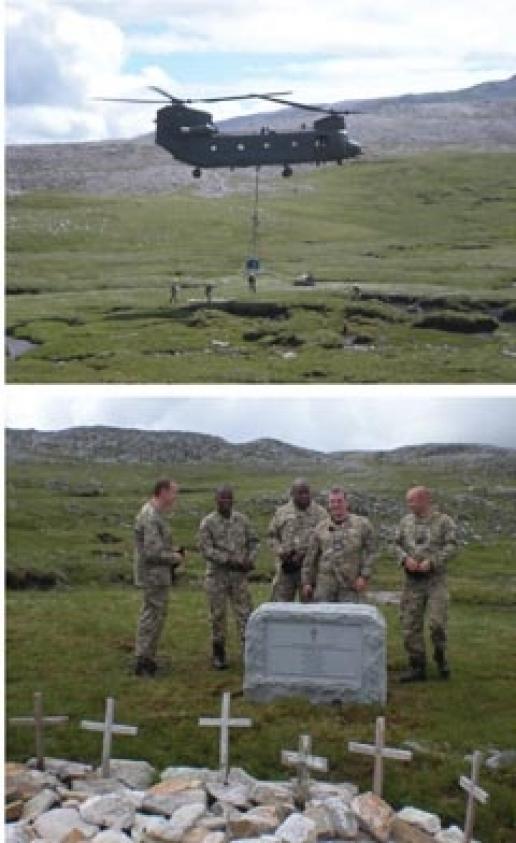 A memorial made by A&J Robertson (Granite) Ltd of Aberdeen from a 1.2tonne block of Karin Grey granite was flown into the Scottish Highlands by Chinook helicopter this month (August) to mark the spot where the crew of an Anson plane died when they crashed on Ben More Assynt in April 1941 during World War II.

Due to the inaccessibility of the crash site, the crew were buried on the mountain rather than taken to a cemetery, their final resting places marked with a cairn and metal crosses. A memorial was erected in the nearest graveyard at Inchnadamph, 20 miles north of Ullapool.

In 2012, the Commission decided to supplement the cairn, which had deteriorated, with a granite marker to identify and protect the aircrew’s burial site from becoming lost or disturbed in the future.

The War Graves Commission worked with Robertson Granite on the memorial. Unable to source a piece of Scottish granite to suit what they wanted they initially chose Norden Light Grey granite for the memorial. But they wanted a natural block with a recessed panel at the front carrying a relief inscription. A block of Norden could not be found that fitted the bill, so the Finnish Karin granite was chosen instead.

The site on Ben More Assynt is the War Graves Commission’s most remote site in the UK and the logistics of replacing the cairn proved challenging. But the RAFâ€ˆassisted with the placing of the 850 x 1050 x 400mm memorial by providing a Chinook helicopter from RAF Odiham to airlift the new marker and the necessary tools and materials for its installation to the mountain.

The Commission has kept the families of the crew informed throughout the project and Bernie Tompsett, a nephew of Sergeant Harold Arthur Tompsett, one of the men who died in the crash, said: “It was a time when so many families learned of the tragic loss of their loved ones… Perhaps we are fortunate that they came to rest in such a beautiful part of Scotland.”