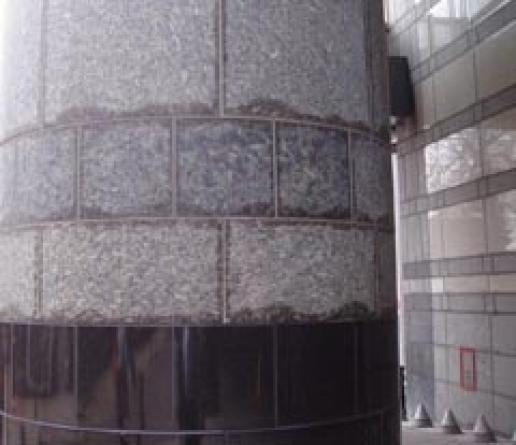 David Francis is a hands-on mason who has specialised for many years on the memorial side of the stone industry. He was Technical Advisor to the National Associations of Memorial Masons, writing manuals and City & Guilds Qualifications. If you have an issue regarding any aspect of memorial masonry, David is happy to help. Send your questions or comments to David at [email protected]

The trade takes a pride in the appearance of its work and is concerned when staining appears without apparent cause. Being a London mason, marble and stone were the mainstay of my workshop. What a difference between when I started and now. The craft of the mason has been overtaken by the machine in many areas.

We produced everything from memorials to kitchens, bathrooms, fireplaces, sculpture and much more, for many years, with basic tools.

The industry is well aware that marble will absorb all manner of chemicals. People leave wine and lemon on kitchen worktops, lean metal objects against headstones, and birds sit on sculpture when it is installed in open places.

Portland limestone does not fare much better, until the chemicals within the stone work their way to the surface and harden, the stone is susceptible to staining, which can be difficult to remove. The military pattern memorials can be a problem when candles are placed on the top edge and pictures in wooden frames are hung at the back of headstones. The wax from the candles will penetrate the stone and stains used on the wooden frames also stain the stone.

But granite is more susceptible than memorial masons and architects often realise. Although granite is generally considered hard and impervious to moisture, that is not always the case. There are porous granites, many imported. They are susceptible to capillary action, drawing chemicals up from runny cement that is used in the fixing of a headstone. On buildings, mastics used to joint granites have leached oils into the granites, making the joints look continually damp and creating the so-called picture framing effect. This was a problem in the 1990s but should not now occur as edge sealers and non-staining mastics are available.

In the cemetery, people use all sorts of cleaners on stone memorials, which can ruin gold lettering, scratch slate, dull the surface polish and causing erosion of limestone. It is unfortunate that DIY stores sell memorial and kitchen worktop cleaners that are not always appropriate for the material that a customer has.

A marble memorial headstone I once saw in the south of London had really bad staining across both the front and back of it.

The monumental mason who had installed it, replaced it but, again, the same staining occurred. The mason tried everything to remove the stains, the customers assuring him that they had not put anything on or against it. In the end the exasperated mason sent a piece of the marble to a testing laboratory. The verdict was metal staining, which is extremely difficult to remove. The only possible explanation is that someone had left something metallic against it.

On another occasion cemetery staff hid a petrol can behind a memorial. In it was a two-stroke engine fuel mixture. Unfortunately, the petrol and oil mixture was often slopped as a lawnmower was filled and a bright orange stain penetrated right the way through from the back of the headstone and showed on the inscription face without any hope of ever being able to remove it.

It would be a great help to all masons if we could gather such information and publish ways to remove or lessen stains on stone work.