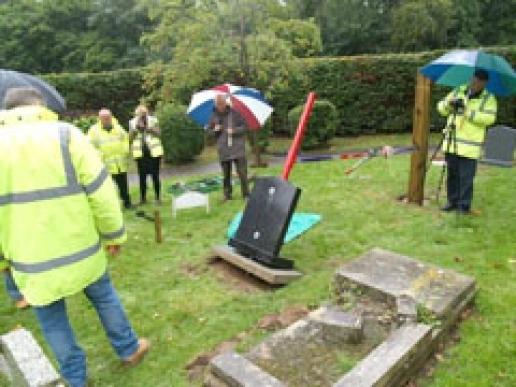 Anton Matthews, who developed the Stone-Safe memorial fixing system, has continued his campaign to show that the single pin fixing system of the type approved by NAMM (the National Association of Memorial Masons) does not comply with the British Standard, BS 8415. This month (16 September) he carried out another demonstration, this time at Redstone Cemetery, Redhill.

The video below was taken at the demonstration.

But NAMM has pointed out that memorials are supposed to be fixed into undisturbed soil, which a pit filled with sand clearly is not.

BS 8415 says the soil conditions can be tested by it being possible to drive a sharpened wooden stake into the ground with some difficulty. Anton tried this at Towcester Road Cemetery. You can watch a video of him doing that here.

Fixing systems in coarse sand or gravel are supposed to be able to resist a loading of 150kg applied 1m above ground level for one minute. The Stone-Safe system again demonstrated its ability to do so. NAMM does not doubt that it is an effective fixing system and has tested and approved it. But it says other fixing systems, which are easier to use and less expensive, also comply with BS 8415.

The pin fixing system in the latest demonstration at first failed to hold the headstone at all. The stone, that Anton says was drilled with a hole according to the manufacturer's instructions, simply slid off the top of the pin, leaving the foundation and pin fixed into the ground. There was nothing to stop the stone from falling catastrophically.

The stainless steel pin was then resined into the hole in the bottom of the stone to test the anchorage system in these ground conditions. This is not how a headstone would normally be fixed because it would make it impossible to remove the stone for a subserquent inscription. With the pin resined in, the fixing did resist loads of more than 150kg momentarily but the loading rapidly fell away and the fixing was pulled through the ground, allowing the stone and the foundation to lean.

Anton carried out a sheer test on the soil a little way under the surface that showed it was 'very soft' with 'very low strength'. He also carried out a moistrue level test that showed the ground was moist, which was not surprising as it rained quite a lot in Redhill on 16 September.

Anton maintains that his Stone-Safe system is a particularly safe fixing system and should be used by cemeteries following best practice.

NAMM maintains that pin fixing systems are perfectly safe, as demonstrated by the fact that there has not been a single incident reported that involves an injury resulting from the failure of one of its approved fixing systems. NAMM says that even in Anton's demonstrations the memorials do not fail catastrophically and would not, therefore, be in danger of injuring anyone.