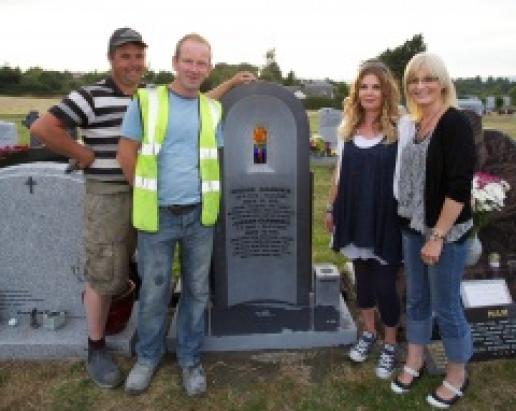 Irish RTE radio talk show host, writer and presenter Ryan Tubridy was clearly moved as he told listeners about the tragic case of Aisling Giannikis, whose husband died of a heart attack shortly before her 16-year-old son died on 23 December 2011 from a muscle-wasting disease. He described it as one of the most difficult topics he ever had to talk about on air and could clearly be heard trying to compose himself as he read out an email from a friend of the Wicklow town woman.

Patricia Shortall wrote the email to Ryan in Febuary to see if he could help her friend Aisling Giannikis by sppealing for someone to supply her with a headstone for her busband and son, as she had no money to pay for it after meeting the costs of two funerals.

Barry Kavanagh from Irish Blue Limestone company McKeon Stone in Stradbally, Co Laois, was among those who heard the broadcast and, moved by the story, offered to supply and erect a headstone for Aisling free of charge.

So last month (July) Barry Kavanagh and Darren Moran from McKeon Stone met Aisling and Patricia in Rathnew cemetery and installed the stone, as promised.

Patricia thanked both the Ryan Tubridy show and McKeon stone for their help and generosity.

Patricia told the local newspaper, the Wicklow News: "The pain of Aisling losing her two loved ones will never go away but it is one financial burden she won't have to worry about."