Memorial wholesaler fined after man's back is crushed 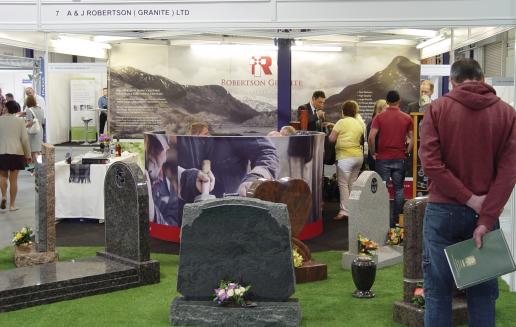 Robertson Granite's stand at the NAMM Tradex exhibition last year. Robertson is one of the UK's leading memorial wholesalers.

Scottish memorial wholesaler A&J Robertson (Granite) Ltd, based in Aberdeen and supplying the whole of the UK, has been fined £23,500 after an employee's back was crushed by a slab of granite cut from a block.

The company was in Aberdeen Sheriff's Court on Monday, 29 August, while the rest of the UK enjoyed the August bank holiday, which the Scots do not have.

The Sheriff, Graeme Napier, said that in his view the fine should have been £35,000 but he had made it £23,500 because of the previous good health & safety record of A&J Robertson and the obvious importance the company attached to health & safety. The company holds quarterly meetings with its own external health & safety and medical advisers as well as encouraging random inspections by its H&S adviser. It has well documented and thorough risk assessments, COSHH assessments and records of health & safety being discussed at board, management and other internal meetings. Nevertheless, the Sheriff said it was a serious incident that could have resulted in a fatality.

The court heard how A&J Robertson employee Kenneth Rennie was left with a shattered vertebra after a slab weighing 100-150kg that had been sawn from a six-tonne block struck him and pinned him to the ground.

Mr Rennie was treated in hospital and needed metal screws and rods inserted into his spine, although he is now back at work.

The incident happened on 6 March 2014 in the saw shed of the company’s premises on Merkland Road East, Aberdeen.

Following an investigation by the Health & Safety Executive (HSE) the company was charged with failing to carry out and implement suitable risk assessments in relation to how the handling of the granite is managed, which it admitted when it appeared in court.

The court heard that Mr Rennie had been in the shed assisting his colleague, Anthony Jack, to move a trolley containing slabs of granite freshly sawn from a block.

After checking everything was secure, the men positioned themselves on the same side of the trolley to push it away from the saw.

Fiscal deputy Emma Stewart, prosecuting, said that as the trolley moved, Mr Jack saw the wooden block between the granite and the support bar fall out. The slab of granite from the edge of the block fell towards the two men. It hit the support bar, which failed and bent outwards. Mr Jack managed to avoid the falling slab but Mr Rennie was struck on the back.

Graeme Robertson, the Managing Director of A&J Robertson, told NSS after the court case that following the accident some changes were made to the trolley on which the granite blocks sit for cutting. "The trolley came with side stanchions which were used to support blocks of wood (inserted between the stanchions and the sides of the granite block) in order to brace the side sections of the granite block after the block had been cut and while the trolley is being moved to be unloaded. These side stanchions were not load bearing and the change we made was to make them load bearing and strong enough to catch a falling slab of granite."

HSE thought the change should have been made beforehand. But A&J Robertson argued that it had used the saw, including the trolly, as it had been supplied by the manufacturer. It was the same way the saws were supplied and used all over the world. "These stanchions were not supplied to be strong enough to bear the weight of a falling slab of granite. Perhaps they are now," said Graeme.

Another change the company made was to write a specific Risk Assessment for the task of unloading the saw after a slab has been sawn. Previously, the Risk Assessment had covered the whole sawing process involving this particular machine, but HSE considered it was not specific enough. "We also have a Safe Working Procedure in place but that, too, was deemed to be not specific enough for the unloading activity," says Graeme.

He adds: "Our own external H&S advisers visited the accident scene immediately and conducted a thorough investigation of the accident." That resulted in the rapid implementation of the changes mentioned above. The HSE visited a month later and produced its report a year after that.