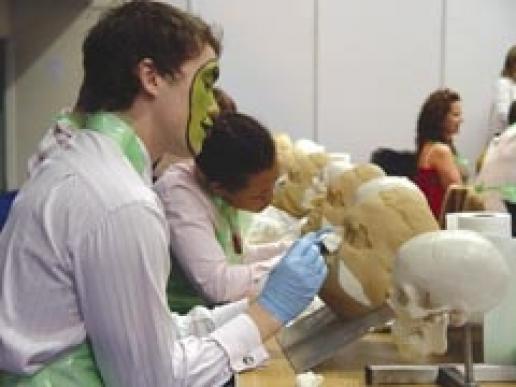 The Tradex memorial masonry side of NFE last month (June) saw new memorial designs and developments in handling, fixing and IT. NSS reports from the show

The National Funeral Exhibition has its odder aspects: the unexpected arrival of two sheep advertising coffins at the opening ceremony; seminars on the reconstruction of injured faces; a demonstration of glass blowing with the glass incorporating cremated remains; and a stand selling funeral joke items.

The more macabre aspects of the show have led some on the memorial masonry side of the death care industry to wonder how appropriate it is for Tradex, the exhibition of the National Association of Memorial Masons (NAMM), to be associated with the NFE.

Many of those who exhibit on the memorial masonry side of the business, however, like the idea of reaching the funeral directors who form the largest proportion of the visitors – and attendance at this year’s show in June was up 11%. There were also more exhibitors, although fewer on the masonry side.

The NFE, which is owned by the National Association of Funeral Directors, was once again held in two of the exhibition halls of the agricultural centre at Stoneleigh Park, Coventry. It is a pleasant enough venue and there were about 170 companies represented by the exhibitors. Coffins, hearses, funeral clothes and mortuary equipment dominated, although there was a reasonable showing of memorials from about 15 exhibitors on this side of the industry. Most are in the Tradex hall, although Steve Richardson of Memorial Service in Essex concentrates entirely on selling to the funeral directors and cemeteries and has his stand in the main NFE hall.

Rather than showing a whole range of memorials, he had an ingenious stand painted to look like a church, complete with ghost. “I wanted to catch people’s attention,” he said. He had had a film professionally produced showing how memorials are made, which he wants funeral directors to show in their parlours.

The rest of the memorials were in the Tradex hall, and back for the first time in eight years were A&J Robertson from Aberdeen. They were the last of the major wholesalers to resist importing memorials from China or India, but having been doing so now for several years have found it has increased their business without significantly hitting sales of the memorials they make, which still account for about 40% of their business.

Managing Director Graeme Robertson said the exhibition was an opportunity to say thanks to existing customers, meet new customers and perhaps attract back some previous customers.

He felt changes in the industry meant people would not buy memorials off the stands in the way they used to at exhibitions, which was why he was only exhibiting three stones on his stand. Two were in Swedish Bohus and Candeias that Robertsons had made in Edinburgh. The other was made in India from an Indian stone called Argyll Blue.

The fact that Robertsons had not exhibited at a Tradex for eight years highlights one of the issues of exhibitions for the memorial sector – the frequency. When Tradex was started by NAMM about 20 years ago it was annual, but that quickly became every two years because the wholesalers did not have enough new ranges to be able to show something new every year. Even every other year is more often than many feel it is necessary to exhibit, although they all value face-to-face meetings with customers and like the opportunity of seeing a lot of people in a short period at an exhibition.

Hailin Williams, whose Rainbow Bridge company selling Chinese memorials were exhibiting for the first time, made the point that you can see people at an exhibition who don’t have time to see you in their offices. Rainbow Bridge were showing new designs, such as a broken column, that had been instigated by their customers in the UK.

Perhaps it is, though, easier for customers and suppliers to keep in touch these days using the internet. It is an area George Willcox (Granite) have been developing over the past two years since the previous NFE and they showed the results of that development in the form of their new website at the exhibition (it is reviewed by the Mystery Surfer on page 12 of this issue).

Eurotrace, exhibiting for the first time and saying they had a file full of new names as a result, also have a new website. They got theirs up and running two weeks before the exhibition.

Another IT development is coming from the Blast Shop. Although it will not be launched until September, they were previewing the new version of their Signum lettering software at NFE. It should cost less than £3,000.

On the memorials themselves, the latest development seen on a number of the stands is marquetry inlay in marble.

Odlings only showed their new range of kerb sets on their stand and new MD Duncan Reynolds said: “The response at the show has been absolutely brilliant.”

Mega Granite, who have moved on to a new five-acre site near junction 25 of the M5 at Bridgewater, were showing a new design of memorial that has an interchangeable carving on top in the same material as the headstone is made of. On show were ornaments including a cross, an angel and even a car.

Fixing memorials is still an important issue and there was a new system called Lok-down introduced by Nettlebank. It secures the stone to the base and foundations quickly without the use of cement or resin and comes with a 30-year guarantee.

It is locked in the same way as the nuts on alloy wheels on a car, so it is safe from tampering but if a second inscription is required can be completely dismantled and the headstone removed. The same fixings can be re-used to re-fix the headstone, the only part needing to be replaced being small plastic plugs that cover the holes.

It is all stainless steel and brass and costs £28 plus £7.60 for tools needed to use it. Nettlebank believe it is worth displaying in memorial showrooms so that the benefits of the system can be explained to customers.

The Mason’s Lift TRK200 that engineers RWL Products in Morpeth, Northumberland, were talking about but still developing at NFE 2007, was on show this time. “It’s taken a good four years to design and develop,” Richard Lillico, who produced it, told NSS.

Powered by a 9kW four-stroke Mitsubishi engine that operates hydraulics in two directions (up and down and leaning back and forward) as well as the drive to the rubber tracks, it is called the 200 because it can lift 200kg. It is only 660mm wide so it can fit through cemetery gates and at £4,500 found some ready takers during the exhibition.