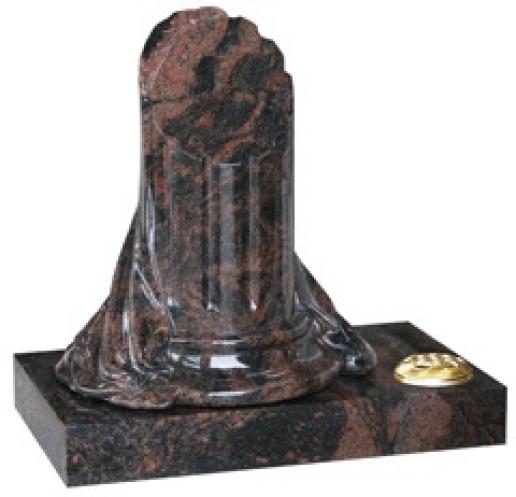 One of the new designs being introduced at the National Funeral Exhibition next month by Rainbow Bridge.

David Hyde of Leisure Expo, the professional show organiser who took over the running of the National Association of Funeral Directors’ National Funeral Exhibition (NFE) last time, said then he intended to stage the show every two years (it had been four years since the previous one).

That was two years ago and, sure enough, the NFE is back at Stoneleigh Exhibition Centre in Warwickshire next month (Friday to Sunday 12-14 June).

The National Association of Memorial Masons, who tied their Tradex exhibition in with the NFE last time but afterwards said they were not sure if they would continue to do so if the show went biennial. Some of the Tradex exhibitors said they felt a little odd being alongside coffins, hearses and mortuary paraphernalia. However, NAMM have decided to tie their exhibition in with NFE again and let David organise them together.

There are about 140 exhibitors this time, 10% of them associated with the memorial masonry side of the death care industry (they are listed on page 36). Several of those who exhibited last time – Strongs Memorials, Odlings, George Willcox, SP Richardson, The Blast Shop – did well enough to consider it worth returning this time. The organisers hope to see at least as many visitors as the 2,200 who attended last time, possibly even more if a new family day on the Sunday works well.

This new feature is to help small businesses whose directors can only make it on the Sunday so they can bring their families along with them. Activities outside of the show will include archery, 4x4 rides and laser clay shooting. There is also a beer garden that will be open all three days of the show where visitors can compete in a petanque (or boules) competition.

As usual, NAMM will be staging their Craftex competition as part of their Tradex stand, which means there will be some of their members’ best work on show. Craftex is NAMM’s competition to find the best memorials and carvings by its members. Over the years there have been some stunning winners – such as the Sword Beach piece in lead and slate pictured on the previous page that won the Carving category last time. It was produced by Nick Hindle of masons R Payne & Son.

It was also on show at the National Memorial Arboretum in May when Princess Anne visited to officially open the permanent NAMM Centenary Garden with its time line of memorials from the Romans to the present day. NAMM were back at their Centenary Garden at Alrewas this month (May) to mark the anniversary of the Princess’s visit.

Another permanent exhibition of memorials opened last month (April) in the magnificent grounds of West Dean College in Chichester, one of the top training centres for building conservation in the country. This time the opening was performed by Lucinda Lambton, the writer, photographer and broadcaster.

The exhibition includes 54 works placed in the grounds of the College, the walled garden, the churchyard, the park and the St Roche Arboretum.

The memorials, the vast majority of which are stone, although some are also seats, bird baths or other less formal representations of memorials, include some of the finest lettering to be seen in the UK today – such as the Caithness stone lettered by Richard Kindersley pictured on the left of this page.

Called the Art & Memory Exhibition it is the result of years of untiring work by Harriet Frazer, the founder of Memorial by Artists, dedicated to helping the bereaved commission individual memorials from artist lettercutters and engravers, from which grew the Memorial Arts Charity.

For the past three years Harriet has focussed on raising the £1.5million necessary to commission the works of art for a permanent exhibition of designer-made memorials.

The exhibition at West Dean is only one part of that. The original idea was to have the exhibition houses at one place, but as that proved impossible it will now be in several parts at various locations. As well as West Dean there will be exhibitions at Blair Castle in Fife, in Canterbury Cathedral Memorial Garden, Birmingham University Botanic Gardens and Grimsthorpe Castle in Lincolnshire.

As Harriet told NSS, in many ways it is better to have more than one site for the exhibition because it means more people will be able to see and admire the work of some of the country’s finest artist craftspeople.

Elsewhere, the Memorial Awareness Board continue with their campaign to target the memorial masonry trade, the cemetery authorities and the public at large.

The latest proposal to engage the public is a photographic competition to encourage entries of photographs taken of cemeteries and memorials. It will be run through specialist photographic magazines and other consumer media.

That will be in addition to the now well-established Cemetery of the Year Awards, which is now in its 12th year. Last year it attracted more than a 60 entries. The Awards ceremony is now an established part of the of the Cemetery & Cremation Management (ICCM) annual conference in September each year.

The Awards involve the memorial masonry industry by including an award for the best memorial. MAB further involve memorial masons in their campaign with their Most Unusual Memorial Competition, last presented in 2007 to Patrick Aivazian from Henry Wilson Memorial Masons in Uxbridge for the ‘Pint of Stout’ memorial pictured on page 36. For more information about the competitions and entry forms visit the MAB website, www.memorialawarenessboard.com.

According to those in the memorial masonry business, sales of stones seem to be fairing reasonably well in the recession so far, although it is patchy. Perhaps they have been helped by a cold winter and possibly by the Ministry of Justice guidelines on memorial safety that called for restraint by burial authorities on topple testing and strapping or laying rows of memorials down flat.

The document, called Managing the Safety of Burial Ground Memorials, had been expected to come from the Health & Safety Executive, which comes under the Ministry of Justice, but coming from the Ministry itself gives it even more weight.

NAMM are also currently working with NPTC City & Guilds to become an accreditation centre for their training. They plan to offer a range of NAMM City & Guilds culminating in a Diploma in Memorial Masonry, which will be the highest qualification for memorial masons. They are also working towards the Office of Fair Trading Approval Scheme for their Codes of Business Practice for members. The scheme was introduced by the OFT five years ago and is highly prestigious. If they can achieve it, it will say a lot about the standards of their members.

All of which is helping NAMM to be seen as a trade body that masons want and need to be members of. Even in this year of recession membership has continued to grow, and not just of memorial masons. On average, one new burial authority is also joining every week.

It is a healthy organisation that Ian Gostling, the National Executive Officer, will be handing over to his successor, Lisa Jones, when he retires at the AGM in Chester on 18-20 September.

Although that might not be the last we see of Ian as he has offered his services to continue working with NAMM to see some of these projects that he has instigated and are under way through to completion. n

That could be something that has to be concluded by NAMM’s new National Executive Officer, Lisa Jones, when she takes over from Ian Gostling at the AGM in Chester on 18-20 September.

She joined NAMM a year ago with a remit to sort out the memorandum and articles of the organisation, which she has done. She has worked for the Retail Motor Industry Federation and joined NAMM from Coventry Council, where she dealt with complaints. She says she would like to improve NAMM’s procedures for dealing with complaints from the public about its members but apart from that has no plans at the moment to make any changes to the organisation whose membership has been growing for several years. “I still have a lot to learn and will be visiting members’ premises in the coming months,” she told NSS.

One thing she will not have to sort out – because it was resolved this month at the BRAMM executive meeting – was a growing concern among NAMM members about the British Register of Accredited Memorial Masons’ proposal to make on-going training compulsory in order to maintain a listing on the Register used by councils to verify the skills of masons. The BRAMM executive have agreed that such training should be voluntary.