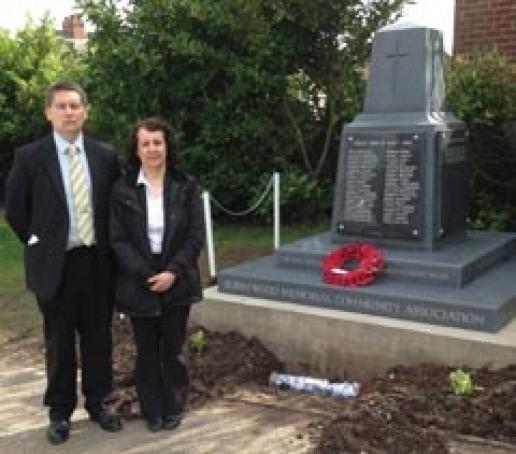 Thanks to Odlings and its retail outlet of Pâ€ˆJâ€ˆNeville Memorials in Lichfield, Staffordshire, the community of Burntwood, which is near Lichfield, has a granite memorial to be the focus of its World War I commemorations on 4 August.

All the names and the inscriptions on the front of the memorial were cut by hand. The names on the plaques were cut at Pâ€ˆJ Neville Memorials, which makes a feature of hand lettercutting to distinguish itself from local competitors, while the words on the plinth were cut at Odlings in Hull because the slabs of granite were too big for Nevilles to handle.

The names of the World War I casualties had been inscribed on a wooden plaque kept in the Burntwood Institute, so were recorded, but it still took 10 years to check the records and find the names of the World War II and subsequent casualties, not to mention raising the money to pay for the memorial (even though it was supplied at a much reduced price thanks to the involvement of Anna Allan, who is the manager at P J Neville Memorials, and the generosity of Odlings).

Lee Hall, at Odlings’ factory in Hull, says: “They gave us a bit of a back-of-a-fag-packet drawing and we went back to them with a CAD drawing that they were very happy with. I installed it myself.”

The memorial is at the front of Burntwood Institute building, which Anna Allan says is the hub of the Burntwood community. The memorial was dedicated at a service conducted by the Vicar of Burntwood, the Rev Margaret Mattocks, on 8 April. Deb Wood from the Girl Guides played the last post on a bugle and Corporal Mark Rollason, a serving soldier from Burntwood, laid a wreath. Civic dignitaries and children from the local primary school attended the service, with the youngsters burying a time capsule in front of the memorial. Lee Hall and Anna Allan were also there.