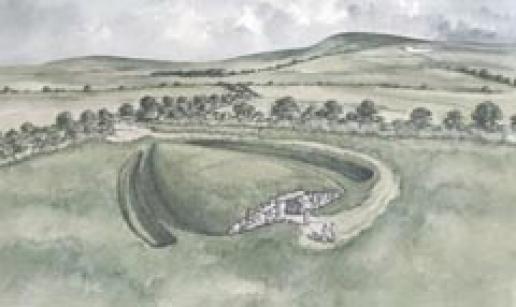 A farmer in Wiltshire has looked back over the millennia to return to an ancient way of commemorating the deceased. He is building a new long barrow, the first for 5,000 years.

The farmer is Tim Daw, who also works as a steward at Stonehenge. That is what led to him coming up with the idea to build the long barrow on his land between Stonehenge and the stone circles at Avebury.

He admits he did not really believe he would get planning permission for the memorial chamber because the site he wanted to use is in an Area of Outstanding Natural Beauty. But he applied anyway and the only objections came from English Heritage, which was worried visitors might think it was genuinely a neolithic structure.

That would not have been a danger with the original plans because Tim had intended to build the chamber in concrete. Fortunately, Martin Fildes of Riverdale Stone read about the scheme in The Times newspaper and contacted Tim.

He persuaded Tim not to use concrete but to build the barrow in the same way it would have been built 5,000 years ago, using natural Sarsen stone found in the surrounding fields and laid without mortar (although there is a bit of lime mortar that cannot be seen). Martin also convinced Tim that Riverdale Stone was the company to carry out the work.

The plan is eventually to have seven chambers that will accommodate about 300 urns containing cremated remains, but the barrow is starting off with four chambers so it can start recouping the cost of building it. With each niche costing only slightly more than the price for putting ashes into columbaria, they are already selling fast.

The impressive construction of stone is now approaching completion. It will then be covered with about 5,000tonnes of chalk and topped off with grass.

Like original long barrows, this new structure has been oriented so that the sun will shine through it at dawn on mid-winter’s day. It has even been blessed by Druids – and Martin admits it was a first working with Druids dancing round him.