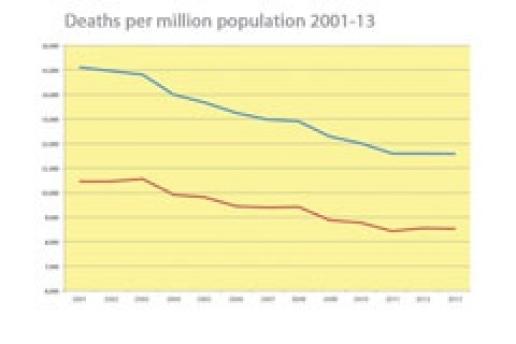 The severe ’flu doing the rounds in the winter has taken its toll and increased deaths. That is reportedly starting to provide a boost to memorial sales. Figures from the Office for National Statistics (for England and Wales only) show deaths in March were 47,880 (16% up on a year earlier), in February 46,704 (up 13%) and in January 60,888 (up 24%).

The increases are significant, but the winter of 2013/14 saw a particularly low number of deaths – in fact, the 18,200 ‘excess winter deaths’ (as the number crunchers describe them) was the lowest number since records began in 1950/51. Just 11.6% more people died in the winter of 2013/14 than in the non-winter months.

But the long-term trend of the UKâ€ˆdeath rate is down. In 1963, 654,288 people died in the UK – more than 12% of the population. Fifty years on (the latest complete figures available) 576,458 people died – less than 9% of the population. In 2004 the number of people dying in the UK fell below 600,000 for the first time since 1958. The death rate reached an all-time low in 2011 of 8.7%. It moved up again in 2012 and 2013, but unofficial figures for 2014 produced by adding up the monthly England and Wales figures from the Office for National Statistics (ONS) and extrapolating a figure for the UK suggest it fell again last year.

The monthly figures exclude some deaths and the causes of them, so the compilation of UK-wide records can continue for more than a year, even though the ONS reports the number of deaths in England and Wales (only) weekly and monthly. Adjustments become increasingly small as time goes on, so the fall in deaths is likely to be accurate even if the number is not exact.

The reasons for the long-term fall in the death rate are clear. Over time there has been a massive reduction in the number of infant mortalities and women who die giving birth, more people survive illnesses, people are living longer and the population in recent years in particular has been swollen by immigrants, who tend to be healthy young adults.