More gravestones knocked over by vandals 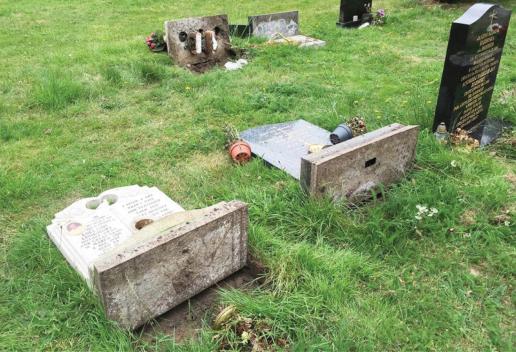 Gravestones knocked over by vandals at North Sheen cemetery in London on Saturday night.

More gravestones have been pushed over by vandals. This time around 50 stones were knocked over in Hammersmith & Fulham Council's cemetery at North Sheen in London on Saturday night (13-14 August).

In a statement on 15 August the Council said:

On Saturday night in North Sheen Cemetery there was an act of vandalism where a number of memorials were pushed over and in doing so a small number were cracked / damaged.

The police are currently investigating the incident and have had a scenes of crime officer at site taking finger prints from the memorials affected.

Hammersmith & Fulham Council has arranged for a memorial mason to attend site this week with a view to re-setting those memorials pushed over and repair those that were damaged.

Cemetery staff are currently recording the number of those memorials that are affected and will be writing to the grave owners advising them of the vandalism and that steps are being taken to remedy the vandalism.

Hammersmith & Fulham Council Leader Stephen Cowan said: “This was an appalling act and our hearts go out to the families affected. We will do everything we can to catch the mindless vandals and we appeal for any information that might help the police.”

If you have any information call Crimestoppers anonymously on 0800 555 111.