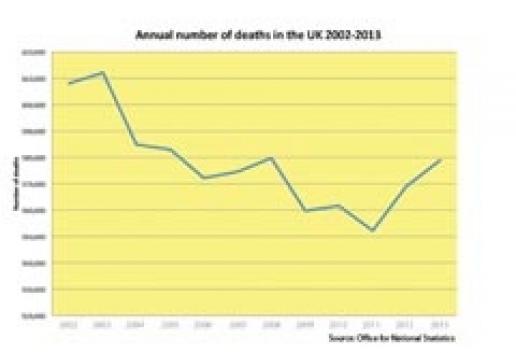 All over the country, including the Cenotaph in London, war memorials have been cleaned, repaired and, in some cases, newly erected in preparation for the commemoration of the centenary of the start of World War I on 4 August. It can only serve to remind people of the important role stone plays in memorialisation.

The longevity of the post-World War II baby boomers may have reached a peak. The number of deaths is on the rise again (see the graph below). Nobody wants to be too pleased about that but it does have a direct and beneficial impact on the death care industry, including memorial masonry.

Now the trend looks to have reversed, both in terms of the number of deaths and the rate of deaths. In 2012 there was an increase and it will have increased again in 2013 (the final figures were not released until the end of May, after we had gone to press, and the figure on the graph is only an estimate, but it was clear there would be another increase for the year – and that starts to look like a trend).

It has, of course, always been inevitable that the post-war baby boom would eventually lead to a corresponding increase in mortality. People born in the decade after the war are now between 59 and 69, although the baby boom lasted longer than that, reaching a peak of nearly 100 live births per thousand women between the ages of 15 and 44 in 1964. As that generation reaches its alloted span it should produce an increase in business for the death care industry for a sustained period.

Even if the mortality rate does continue to increase now, with life expectancy for men at 78.2 years and for women at 82.3 years, according to the Office for National Statistics, there could still be a bit of a wait for peak mortality. Nevertheless, anecdotally, the memorial masonry sector has seen sales increase since 2011.

But there are other factors that could also be good news for memorial masonry, notably in the next four years the commemoration of World War I, which might be expected to raise the profile of the role of stone in memorialisation.

All over the country, war memorials have been cleaned and repaired in preparation for services on 4 August that will mark the centenary of the UK’s declaration of War on Germany. The Cenotaph in London has undergone a major renovation and clean – more, in fact, than some approved of, although in the end it was felt that the Portland limestone memorial should sparkle as a mark of respect for the occasion.

Even a few new war memorials have been erected (one of them was made by Odlings and is featured on the next page).

The next four years will see a lot of pictures on television and in the Press of rows and rows of Commonwealth War Graves Commission memorials in this country and overseas. Lined up like servicemen on parade, the cemeteries are a powerful reminder of the lost lives… and the role stone plays in remembering them.

Throughout the four years there will also be paving stones laid in the communities where those servicemen who received a Victoria Cross (the highest medal of honour) during World War I came from. The paving slabs will be made in Scoutmoor York stone by hard landscaping company Marshalls. It is intended that the slabs should be unveiled on the same dates that the medals were awarded. The stone slabs, 600mm square and 50mm thick, carry an engraving of the Victoria Cross along with the recipient’s name, rank, regiment and the date the medal was awarded.

There were 454 Victoria Crosses awarded to British servicemen during World War I, which included pre-partition Ireland. Some also went to soldiers from overseas. Where the recipients have a UK connection, the relevant local council will be offered a paving stone. Where they don’t, slightly smaller slabs (450mm square) will be laid at the National Memorial Arboretum at Alrewas, Staffordshire.

There was a competition last year to design the motif for the paving stones, the winner of which was announced by the Government’s Communities Secretary, Eric Pickles, in November (see NSS December 2013). From more than 200 entries, the design by Charlie MacKeith from London was chosen as the winner. His design impressed the judges for its simplicity and use of the form and lettering of Commonwealth War Graves Commission memorials.

Many Victoria Crosses were awarded posthumously or to servicemen who subsequently died in battle. Their graves are tended by the Commonwealth War Graves Commission. However, some of the people awarded the VC in World War I survived and were buried later. Now the graves of 209 of them have been identified as being in need of repair and maintenance.

The Victoria Cross Trust, supported by the Sun newspaper, has successfully campaigned to secure £100,000 from the government to carry out that repair and maintenance. NAMM (the National Association of Memorial Masons) will advise the VC Trust on what work needs to be carried out and has gained agreement from the Trust that NAMM members will be invited to tender for the work to ensure it is carried out to the standard of the NAMMâ€ˆCode of Working Practice.

The Memorial Awareness Board is also tailoring its annual photographic competition to encompass the World War I centenary and instead of the ‘then and now’ theme of the past, is this year asking for submissions that will somehow reflect the war commemorations.

The National Memorial Arboretum will play a significant role in the centenary. Part of the Royal British Legion family of charities, the arboretum already has nearly 300 memorials, including the NAMM memorial garden that was opened by Princess Anne in 2008. In an average year it receives about 300,000 visitors and that could well increase during the four years of the World War I centenary.

A new memorial will add to the interest in the site in December when it is unveiled by Prince William, The Duke of Cambridge. It will mark the famous football match between the Germans and the English troops on the front line on that first Christmas of the war.

Prince William is supporting the project in his role as President of the Football Association. Schools and football academies across the country are being asked to submit designs for the memorial. The winning design will be chosen by the Prince and Arsenal and England striker Theo Walcott.

His Royal Highness says of the memorial project: “We all grew up with the story of soldiers from both sides putting down their arms on Christmas Day and it remains wholly relevant today as a message of hope over adversity, even in the bleakest of times.”

One of the partners in the project is the British Council, which has produced a ‘Football Remembers’ education pack that is being sent to more than 30,000 schools. It includes material to help children learn about the impromptu truce, including eye-witness accounts, photos, drawings and letters from soldiers, some of which have never been published before.

Such a heightened awareness of stone memorialisation certainly ought to present opportunities to stone companies – but there are threats facing memorial masons as well.

One of them comes from local authorities selling memorials directly to the public. North East Lincolnshire started doing this last year. It had intended to do it a year earlier but had been put off by objections from NAMM, which had sent the council its stance letter compiled by a barrister stating that it was illegal.

The council’s lawyers considered the matter but decided the 2011 Localism Act gave them the right to sell memorials. In October, the council started selling a range of about 20 granite and marble memorials as what it describes as a ‘service’. The staff selling the memorials continue to be paid from rates and the ‘service’ faces none of the overheads of a commercial business.

Its memorials are being supplied by Granart Memorials in Chapel en le Frith in Derbyshire, which is a Company Associate Member of NAMM set up specifically to supply councils with columbaria and memorials for cremated remains. It sees the supply of lawn memorials for burials as a natural progression from that.

Some of NAMM’s full wholesaler members declined to bid to supply North East Lincolnshire council but say if councils become a major part of the distribution chain they will have to reconsider their position on not supplying local authorities.

North East Lincolnshire council told NSS last month (May) it had sold nine memorials so far and was currently processing six more enquiries. At least one other council, in London, has also started selling memorials now and several others are considering it.

Other sectors of industry are concerned that councils might also start supplying products they sell, and NAMM has tried to mobilise all these interests to form a united front in opposition to the move.

The industry itself seems relatively relaxed about the prospect of competition from councils. Many think councils will find it harder than they think to supply memorials and some point out that the industry has continually evolved over the years, introducing competition from funeral directors, private cemetery operators, wholesalers taking over retail outlets, the internet, woodland burials… They see councils as just another ingredient in the mix.