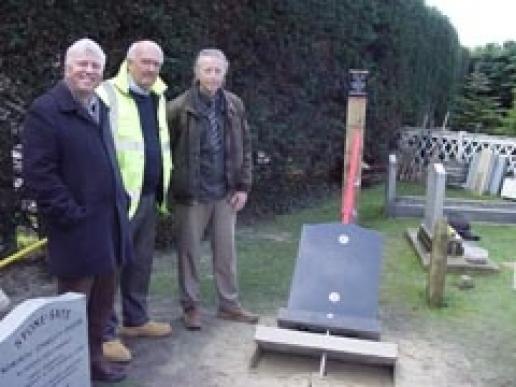 Criticisms by the National Association of Memorial Masons (NAMM) of a video showing the performance of a ground anchor memorial fixing system of the kind approved by NAMM, have illicited a response from Anton Matthews, the man behind the video.

You can watch the video and read the NAMM response at 'Row brews over memorial fixing method test video'.

Anton Matthews makes an alternative memorial fixing system called Stone-Safe, which has a 30-year insurance-backed quarantee. It is more secure than a ground anchor but memorial masons complain it costs more and takes longer to install.

The purpose of the test was to establish if the single pin fixing method of memorial installation as accredited by NAMM is in compliance with the requirements of the standard BS8415-2012. Compliance with this British standard is necessary if memorial fixers (masons) are to meet the requirements of best practice, insisted on by the burial authorities and major leading insurance companies.

The test method used in the video is the method advocated by the testing section and construction section of the British Standards Institute and is described in the video by professor Stuart Moy.

This means that the memorial should remain upright. It does not mean the fixing method should merely prevent the total collapse of the memorial, as claimed by Phil Potts, the National Executive officer of NAMM. As shown in the video, the memorial was seriously dislodged by less than half the required load and professor Stuart Moy rightly states that the pin fixing method has failed.

Safety is a prime consideration in respect of a memorial installation.

There are also other considerations, for example the interest of the bereaved who have responsibility for the memorial in perpetuity. If, under pressure, the memorial is seriously dislodged and it is shown that a pin fixing system which does not comply with BS8415-2012 has been used, the cost of re-fixing the memorial will fall on the bereaved or the local burial authority.

What Phill Potts fails to mention is that NAMM has been instructed by the Chairman of BS8415-2012 to carry out a series of soil tests in various soil conditions in order to confirm the validity of its claim that the single pin fixing method complies with BS8415 +a2 2012.

The chairman has told NAMM to carry out 15 tests in various soil conditions using a penetrometer, which is a device used measuring the relative density of sands.

Memorial fixers (masons) at the present time are relying on the NAMM certification and until the validity of the certificate has been proven under the mandate conditions, the proof of the memorial stability rests solely with the memorial fixer mason.