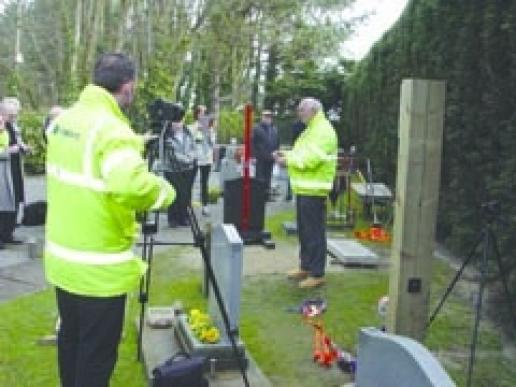 A video posted on YouTube showing the testing of a ground anchor memorial headstone fixing system has angered the National Association of Memorial Masons (NAMM).

The video on YouTube of the memorial fixing system test.

Phil Potts, the National Executive Officer of NAMM, says the test in the video was flawed, but that in any case it showed the anchor did not fail. It prevented a sudden collapse, which is the aim of the system. He says ground anchors have been used for 20 years and there has never been a recorded incident of anyone being injured where an anchor has been used. "In short, they have worked as a safety device," he says.

He also says that many of the makers of ground anchor fixing systems sell longer anchors for use in soft soil conditions for added security.

The test videoed was carried out by Anton Matthews of the Memorial Stone Centre in Bognor Regis in front of an audience of council and cemetery representatives, engineers and press. Professor Stuart Moy of the University of Southampton acted as an indepdendent witness to the test and was seen in the video providing a commentary.

Anton has been lobbying for a clarification of the conditions of testing of ground anchors in the British Standard BS 8415 to make the test repeatable. The current standard requires memorial fixing systems to withstand a push or pull of 150kg applied 1m above ground level in ground conditions of medium sand or gravel.

Anton says the conditions required by BS 8415 are ambiguous and wants the standard to require a 1m square pit to be dug 600mm deep and filled with compacted sand. That way the test conditions can be repeated precisely. He has created these test conditions at his premises in Bognor Regis and on 26 February carried out a test of a ground anchor fixing system he said is approved by NAMM. The test was filmed and the video was posted on YouTube, but has since been removed. Anton says Professor Moy wanted some editsand when they have been made the video will be back on YouTube.

The Committee responsible for BS 8415 met in February after the test had been carried out to discuss Anton's proposals for changing the test conditions. The proposals were not adopted. No decision was reached and the matter was deferred to a future meeting.

NAMM Comments on the Video:

a) The NAMM representatives appointed to the BSI Committee are not ground anchor manufacturers, nor do they have a vested commercial interest.

d) The loose sand being used for the test is not the type of soil prescribed in the current version of BS 8415.

e) In the course of the commentary, Professor Stuart Moy makes comments to discredit this type of stability device. If he studies the geometry of the assembly as prescribed in the ground anchor manufacture’s instructions, a 28mm hole is used in the memorial base and a 30mm hole in the foundation. The prescribed tolerances permit a deviation of at least 63mm from the vertical. As the anchor compresses the soil, obviously further rotation will occur. The nature of the loose sand is illustrated in the video as the foundation digs into the sand as it rotates.

f) Superficial comments – The video did not show if the soft sand had been well rammed every 150mm as the hole was filled. A stonemason of 42 years standing commented that the operator of the ramming tool in the video was “half heartedly patting the soil, not ramming the sand!” The NAMM test is carried out at 36in above the ground, not 1m.

NAMM conclusions from the video

The NAMM accredited ground anchor used in the video test ensured that the memorial still withstood a force of 70kg.

Over many years, NAMM has been at the forefront of ensuring that memorials are erected and maintained in a manner to ensure the highest level of safety.

The NAMM Code of Working Practice prescribes types of memorials and foundations suitable for soft sand locations. Quite simply it is just a question of foundation mass – a structural engineer calculates the mass of a simple precast foundation required to resist a force of 70kg at the memorial apex.

If any further amendments to BS 8415 are considered, in conjunction with the Ministry of Justice Report which in essence describes a de minimus risk situation, the following statement must be considered. “Since NAMM implemented the recommendations of Professor John Knapton, there have been no recorded instances of any injury caused by memorials fixed in accordance with the NAMM Code of Working Practice and BS 8415.”

The Chair of BS 8415, should take into account comments and suggestions made by committee members with commercial and vested interests.