Stepping back 5,000 years to celebrate lives 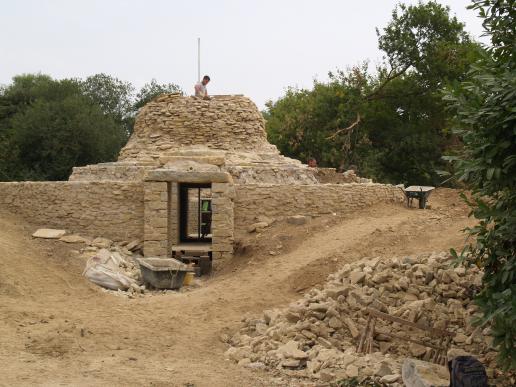 The Round Barrow as it looks now under construction at Hail Weston, Cambridgeshire.

A company called Sacred Stones, set up by two stoneworkers, an entrepreneur and a molecular scientist, is offering a new way of commemorating cremated remains.

The company has been formed by Martin Fildes and Geraint Davies (the stone workers), Toby Angel (the entrepreneur), and Mark Davis (the scientist).

Martin and Geraint were involved in building the new Long Barrow at All Cannings, near Stone Henge, which is now almost full. Their latest project is a round barrow on a farm at Hail Weston in Cambridgeshire. Others will follow.

It is all a little bit New Age, going back 5,000 years to mankind's earliest creation of stone structures to commemorate the dead. The All Cannings barrow was even consecrated by a Druid, although the new one is deliberately secular so it can be used by anyone, of whatever race or creed. Although if you want your particular niche blessed by someone, that is just fine.

The barrow has niches that will carry between one and seven urns of cremated remains – and it is only for cremated remains to avoid any issues with the disposal of bodies. You rent the niches for 15 or 25 years, or in perpetuity (which nowadays constitutes 99 years). They are not unduly expensive – £1,500 for 15 years up to £4,800 for 99 years. And once the time is up, the ashes can be scattered in a nearby wooded area where a commemorative tree can be planted, if required.

The barrow is being built by Geraint and Martin, with the help of up to six others at a time, using local stone supplied by the nearby Churchfield Stone Company, which quarries its own stone. Churchfield has also produced the York stone slabs that separate the niches horizontally and the hexagonal Portland limestone niches for single burials in bronze caskets that fit into them.

The original barrows probably used some kind of clay as a mortar between the stones, most of which has washed away so today they look as if they were constructed using dry stone walling techniques. Geraint doubts they were because using a mortar makes it easier to lay the stones, especially for the dome, so he and Martin are using a hydraulic lime mortar.

No former is being used to create the dome, which is shaped like gothic arches. The stones are simply corbelled. There will be no key stone in the middle, either, just a cap laid on top.

Once the structure is finished it will be covered with earth and grass laid on top of it, minimising its impact on the landscape, although it is pretty well hidden in any case.

Construction is labour intensive because each stone has to be dressed and laid by hand, so by the time the new round barrow opens, probably at the end of September, it will have taken nine months to build.

People are already showing an interest in reserving niches for themselves and their loved ones, as the barrows seem to be proving popular among a good proportion of the 75% of people who are these days cremated.

When it is finished, there will be a fuller report in the printed version of Natural Stone Specialist magazine. In the meantime you are quite likely to hear about it elsewhere because the BBC and the national press are also showing a lot of interest in it. The Independent has made a three-minute video for its website on which Tobey Angel explains the ethos behind the barrow (click here to see that).