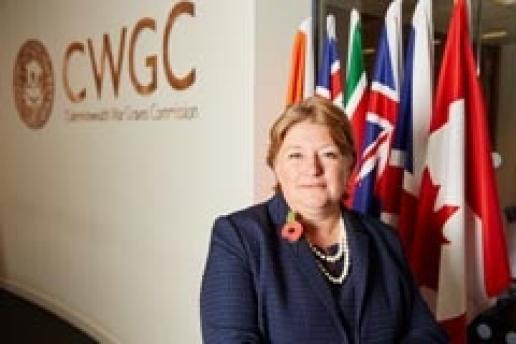 Victoria Wallace has been appointed as the new Director General of the Commonwealth War Graves Commission (CWGC). She joins after 10 years as Chief Executive at Leeds Castle Foundation & Enterprises.

In her new role, Victoria becomes responsible for the running of the CWGC and its multi-national workforce of 1,300 staff.

The CWGC cares for the graves and memorials to almost 1.7million Commonwealth servicemen and women who died during the two world wars. It operates across 23,000 locations in 153 countries on every continent except Antarctica.

Victoria says of her appointment: “It’s a great joy to be coming to this extraordinary organisation at a time of unprecedented interest in the Commonwealth War Graves Commission’s work.

“Visitor numbers to our major cemeteries and memorials have increased massively in the last 12 months as a result of the Centenary of the Great War. But we have more work to do to help those visitors understand the historical significance of our sites and encourage them to visit the lesser known war graves and memorials we care for.

“The Commission, its work and its team have a rightly-deserved reputation for excellence among those who know about us. But that is far too few people. We want the world to value what we do.

“We need to seek greater recognition and be proud of what we have achieved for nearly a century. And, with the Commissioners and the senior team, I am now starting to look at the next hundred years and how we take our mission, to ensure that our war dead are never forgotten, into the future.”

Prior to that, Victoria was Justices’ Chief Executive at Sussex Magistrates’ Courts from 2000-2004 and has held various posts within the Foreign & Commonwealth Diplomatic Service in Tanzania, Thailand, and Belgium. She is also a Council member of the Association for Independent Museums.

Victoria takes over from Brian Davidson, who had been in the post as Acting Director General since July. She is the first woman to hold the post.