When has a memorial fixing system failed, then? 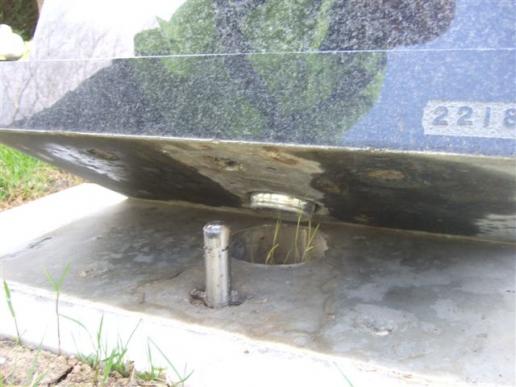 If the headstone is pushed forward it simply lifts off the pin that is supposed to stop it falling.

A comment by David Francis in his ‘Grave concerns’ column about the fixing systems used in a cemetery in Wales that was vandalised (read it here) has prompted a response from Anton Matthews, who makes and sells the Stone-Safe memorial fixing system  in Bognor Regis, West Sussex.

You can see pictures of headstones that were pushed over in Wales at bit.ly/pinfixing. The ground anchors used to secure the stones can clearly be seen.

Anton says in a letter in response to David Francis’s comments: “The nearest memorial in the picture shows the pin (anchor) has not stabilised the memorial when pushed over.

“I believe when the memorial hit the ground it broke the cement joint and became detached from the pin. I would disagree that the pin appears to be bent. The picture shows it is a solid stainless steel bar 25mm in diameter, which would take a lot more effort to bend than the push required to overturn a 120kg headstone in wet ground.

“David Francis says this raises the question ‘did the ground anchors work or did they fail?’.

“They glaringly failed to stabilise the memorials.

“The memorial furthest away in the picture shows that the pin is of larger diameter – 30-32mm – and even then, when the memorial was pushed from the back, as it was, the anchors have torn through the soil with very little effort in such waterlogged soil conditions. This is what the tests Stone-Safe has carried out have shown conclusively.”

There is also a video on YouTube (youtu.be/kMjonjyDPhQ) showing that if a headstone fixed with a pin is pulled forwards (or pushed from behind), the width of the base with the pin towards the back can mean it will simply lift the stone off the pin, meaning the pin plays no part at all in stabilising the memorial.