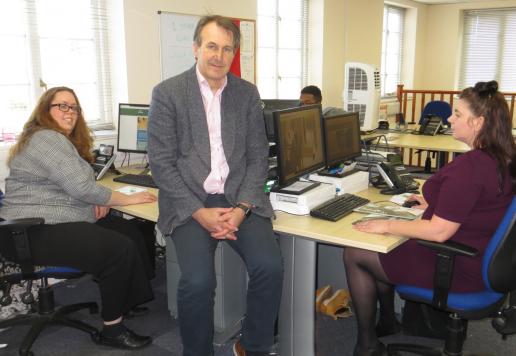 Nick Williams, MD of Strata, at the Ipswich headquarters with some of the company’s 20 staff.

Nick Williams: "The rest of the UK market needs to come up to speed. The Ethical Stone Register is a major initiative and anyone selling natural stone needs to be embracing it."

Strata in Ipswich, the European distribution hub of an Indian stone quarrying and processing company, takes delivery of more than 10 containers of stone a day. Both the Indian parent and Strata are listed on the Stone Federation Great Britain Ethical Stone Register. Strata Stone MD Nick Williams explains why.

India exported more than £161million-worth of stone to the UK last year with £93million-worth of it arriving at Felixstowe. Every day, more than 10 of the containers carrying the stone make the short journey to Ipswich to be stored in Strata Stones’ seven-acre distribution area and warehouse before continuing its journey across the UK or into mainland Europe.

Strata is the UK distribution hub of Indian stone company Stone Age Private Ltd (which the UK company of Stone Age Ltd based in Hemel Hempstead wants to point out is in no way connected with it). Strata supplies stone for exteriors and interiors, some with innovative designs and inserts of other materials made to bespoke designs and sold under the Orvi name. They are made in India using 21st century technology. 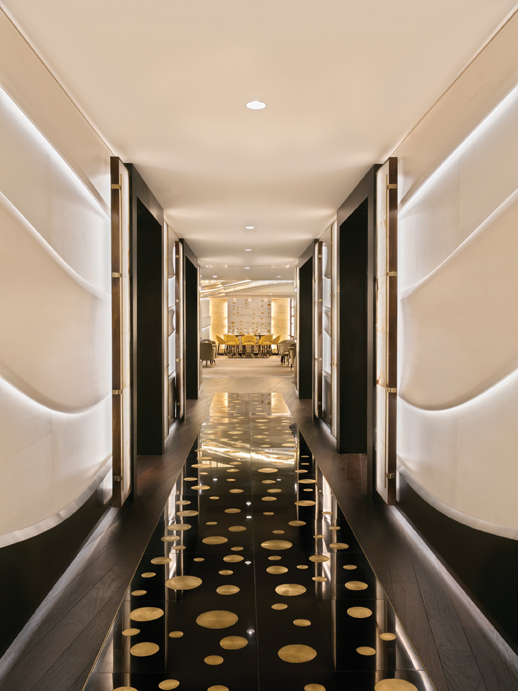 Strata sells Indian stone for interiors and exteriors, including the Orvi range of designer stone surfaces like the £500/m2 ‘Champagne bubbles’ pictured here on the floor and walls of a Champagne bar in Paris.

Nick Williams, previously at Burlington, became a Director of the Indian company in 2017 as well as becoming Managing Director of Strata in the UK. That was a year before Stone Federation Great Britain launched its Ethical Stone Register, for which Burlington was one of the pilot companies helping to develop the methodology. Both Stone Age and Strata are now listed as ‘Verified’ stone suppliers on that Register. 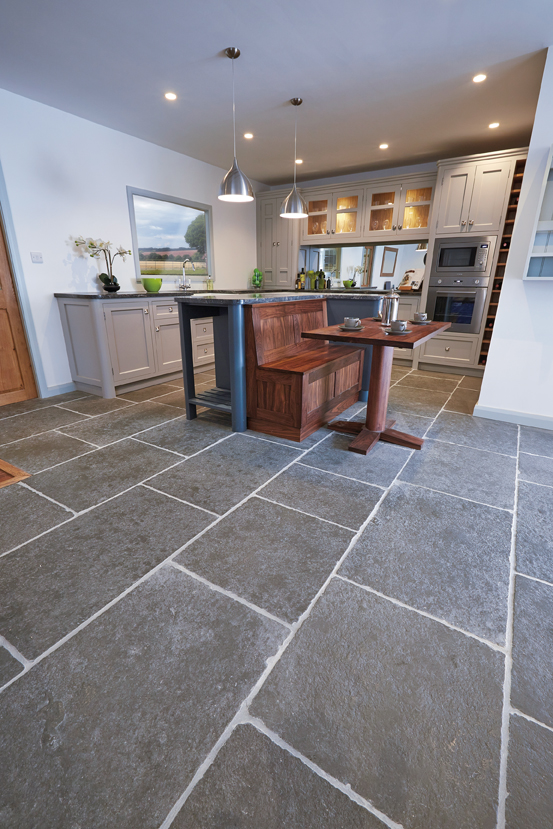 Stone Age Private Ltd was the first, and is so far the only Indian company to use the Register to demonstrate its stone is ethically produced with due consideration to its environmental impact. And with its quarries and factories ‘Verified’, it was a relatively small step to include the operation of Strata in the UK.

Stone Federation created the Ethical Stone Register to help the stone industry in the UK demonstrate that the stone it uses from all over the world is sourced from quarries and factories that are free from modern slavery and employment practices that put people’s lives and health at risk or disregard the environmental impacts of their operations.

There has been a number of reports in the national press and on radio and television about slavery in the stone supply chain and environmental damage caused by quarrying.

The final tipping point for the creation of the Ethical Stone Register was the Modern Slavery Act that became law in 2015, although it was not implemented until the following year. It requires companies with an annual turnover of more than £36million operating in the UK to publish an annual statement setting out what they have done to ensure there is no slavery or human trafficking in their supply chains.

Most stone processing and fixing companies have a turnover of less than the £36million threshold, but some of the clients and developers they supply do not. Firms that have to include a slavery report want assurances from their suppliers that the materials being used are ethically sourced. Most stone companies cannot give that assurance and Stone Federation wanted to develop a way for its members to be able to do so.

It was easier for Stone Age Private Ltd to be able to do that than for many suppliers of Indian Stone because it owns most of the quarries and factories from which its stones are supplied and is, therefore, able to dictate the conditions in them. Even those it does not own, it has partnership arrangements with, so can influence the way they operate.

It not only ensures it does not employ slave labour (which in India is usually in the form of bonded labour working to pay off family debt) but also that the extraction and production processes are carried out safely, with those involved equipped with appropriate PPE (personal protective equipment) and the right tools and equipment.

Nick Williams says: “We are very specific about the way we operate. Sanjeev Agrawal is the owner and I work with him. He is the inspiration behind this move. He convinced me he was serious about it. I have tried to bring processes from Burlington and the Stone Federation into this company, although you can’t just come into a business, wave a magic wand and suddenly it’s how you want it to be. It’s like being a football manager: you have to work out the strengths of your team and get every member to improve their game.”

That has been achieved in a number of different ways. One of them is to have range samples of stone at every stage of production against which newly produced work is constantly checked for consistency.

Nick: “We have ouir 'bible' that sets out the criteria for working – even down to how the stone is packaged, including how the pallet is made, even the type of nails to be used. It’s very specific.” The company had quality assesment procedures in place previously but Nick says: “They needed sharpening up.”

All the stone can now be traced back through its production process to the face of the quarry it came from. Everyone who has worked on it has signed off the work they have carried out. “The Ethical Stone Register tells customers we are a company that works to these standards. The process of getting Verification on the Register took about six months, but I had been working on getting the procedures necessary in place for two years before that. It started to feed through the business last year and the product is getting better.”

But that is not cost neutral. Getting it right first time reduces waste, which cuts costs, but “we are not going to be the cheapest in the market – although we still offer a reasonable price.” 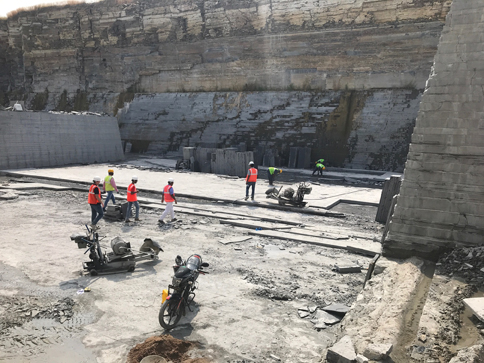 Companies in Britain have also become used to taking advantage of the lack of quality control and assurance by Indian companies to avoid paying for the stone they order. Nick: “There are hundreds of thousands of pounds that get lost in the supply chain and English companies are seen as a bit of a problem in India. They put up with it because there is always somebody else who will supply if they won’t. But a competitive market is not an excuse for not doing things properly. We pay good wages and recycle water. We look after our people and the environment. The factories in India are cleaner and tidier than some in Britain.” 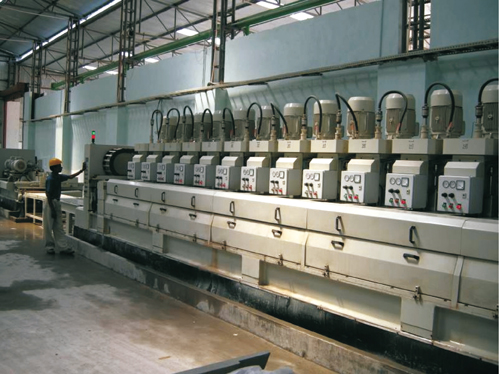 Most stone coming into the UK is imported by wholesalers. Aggregate Industries and Marshalls, for example, have people in place to make sure their stone is ethically sourced. But that isn’t true of most of the market. “The UK is still a very respected country in India and when British companies come along and buy their products the producers think what they are doing is OK. But it’s not always OK.”

A lot of Strata’s stone for paving is sold through builders merchants and most builders merchants publish statements about not knowingly buying materials from unethical sources. However, a lot of them are unknowingly buying it from unethical sources because they do not have anyone on the ground in India or anywhere else they are buying stone to check the sources, let alone third party verification of those sources, which is what the Ethical Stone Register offers.

Nick: “Most of our customers are independent businesses. They understand what we’re doing for them, whereas the buying groups just want to know the price. I’m not saying you should buy Strata, but I am saying you should buy from a company that has all the ticks in a line. Profit is being put before what is right – and there is a right and a wrong. Not all stone is equal.

“The rest of the UK market needs to come up to speed. The Ethical Stone Register is a major initiative and anyone selling natural stone needs to be embracing it.

“The UK has a big market for natural stone because we are a nation of home owners and a lot of stone goes into the domestic market. Other industries are learning to their cost that there can be a consumer backlash when ethical issues are ignored. Customers are starting to quote what they find on the internet about slavery in stone production. Our customers don’t need to worry about that but what I’m saying loudly and clearly is that the rest of the market needs to do the same as us.”

While being the only Indian company on the Ethical Stone Register might seem to be a good selling point, it has its drawbacks, especially in the commercial field, because specifiers are reluctant to insist on a stone on the Register being used when that effectively means if it’s Indian it has to come from Strata – although Strata has a wide range of stones on offer.

Also, the more companies that are on the register and promoting it, the better known it will become and the more successful it will be because it becomes part of the key decision-making criteria.

Nick: “In the future, if natural stone is going to have its place in the UK market that it should occupy, then the industry needs to get behind this initiative.”

Natural stone is under threat from man made materials, particularly porcelain – Strata has even introduced four porcelain products of its own. Porcelain is growing in popularity for kitchen floors and patios, especially where the floor extends out to the paving. Ceramics account for about 75% of the tile market. The makers are happy enough to exploit concerns about the maintenance of stone surfaces, even though porcelain has its own maintenance issues. They will, no doubt, be just as keen to exploit concerns about ethical sourcing of stone, even though porcelain might also face the same issues if it comes from the same countries.