West Ham finds The Only Way is Granite 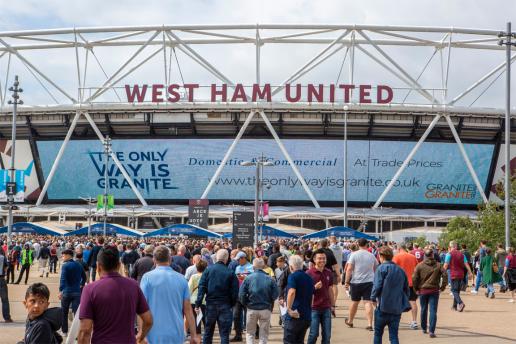 Essex worktop company The Only Way is Granite is supporting West Ham at the London Stadium.

West Ham United has rock solid supporters in Essex worktop company The Only Way is Granite.

The worktop company set up in Wickford, Essex, in 2015 by Nicholas Garwood and his uncle Gi Garwood has built a partnership with the London Stadium Business Club (the London Stadium is where West Ham play), cementing its commitment to the local community.

As a Business Club partner, The Only Way is Granite receives Premier League-level brand exposure, with the company’s logo featuring throughout all West Ham United’s home games.

Although it is a young company, Nicholas and his uncle have more than 20 years’ experience in the industry.

The Wickford-based company offers a complete end-to-end service for customers. “We import the stone, fabricate the stone, and fit the stone from start to finish. We’ve also got a large showroom in Wickford with six full kitchen displays,” says Nicholas Garwood.

With up to 62,000 West Ham fans filling the London Stadium each match day, The Only Way is Granite logo features on a large LED screen at the front of the former Olympic Stadium as well as being displayed on pitch-facing mid-tier boards.

Nicholas is confident the extensive brand awareness the business enjoys, and its eye-catching name, will see The Only Way is Granite continue to grow.

Nicholas: “The name was my uncle’s idea. It’s a talking point and is straightforward as well. To be able to potentially put our name in front of 62,000 people every other week is a big opportunity for us. It’s one thing having a business, it’s another thing getting it in front of people.

“We’re just trying to reach as many people as we can. We’ve advertised on social media and have branding on the sides of our vans... but if supporters see us at the Stadium, it’s easier for people to remember.”

Through the partner programme, The Only Way is Granite is invited to exclusive Business Club events, which have included Q&A evenings with West Ham legends such as Neil ‘Razor’ Ruddock and Sir Trevor Brooking.

And The Only Way is Essex is not just reaching the local market, although remains its prime focus.

Being in the Premier Division, West Ham regularly features on television, which means The Only Way is Granite also appears on television, helping it to reach the national developers it supplies and those it would like to supply.

Nicholas: “If you’re going to West Ham to watch the match, with such a bold name we’ll either be a business you’ve heard of before or you’ll be more likely to remember us.

“We’re hoping to gain business, get some new enquiries, new leads and expand into new areas. Hopefully, we can get a few Premier League footballers interested, as well!”