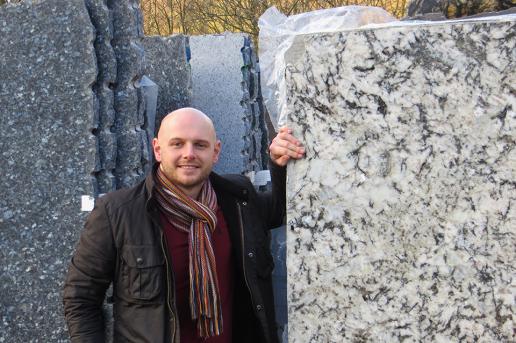 Matt English, who manages Pisani Wholesale near Matlock in Derbyshire: "It’s not all roses. I don’t think it is for any wholesaler out there. But we’re happy with the position we have.”

Pisani left London following the closure of its Feltham headquarters in 2017 but the name lives on. It is now Pisani Wholesale, based at the same premises used by Pisani for many years near Matlock in Derbyshire.

It is still well stocked and it does hold a wide range of the popular granites that small processors are happy enough to buy from it, but it is also establishing a reputation for stocking the harder to source figurative and more decorative marbles, quartzites and granites. They are materials that only more discerning clients will choose, so are not likely to be stocked by even the largest kitchen worktop fabricators. When a job calls for them, the fabricators are content to buy from Pisani. And it seems more clients are asking for them as Matt English, who manages Pisani Wholesale, says sales of them continue to grow.

Other wholesalers have also noted that natural stone has had a bit of an upturn of late. It might be a bit early to call it a trend but it probably indicates there will always be that discerning sector of the market that insists on having what nature created.

Pisani does stock some engineered quartz but Matt English says 96% of what he sells is natural stone and “we are actively focussing on natural – the weird and the wonderful as well as the old staples.”

With some wholesalers as well as larger fabricators replacing ever more of their stock of natural stone with quartz and ceramics, Matt believes the gap for a wholesaler supplying a good variety of natural stones is growing.

And he doubts the absence of a depot in London is much of a hindrance because these days the website is the company’s window on the world – and “we get a lot of compliments on our website”. Pisani still makes weekly deliveries to London.

On the website, the more unusual materials feature prominently. “They help us make a bit of a name for ourselves. They make a statement,” says Matt.

Having the familiar name of Pisani is undoubtedly a bonus but, says Matt: “We are a small team and a new company with a good customer base that we are actively expanding all the time.” Having clients such as Marks & Spencer and supplying prestigious projects like the luxury riverside apartments at Chelsea Creek in London also helps.

“If everyone else is focussing on quartz – and there are some very cheap prices on quartz now – we feel we are in a good place with stone. It’s not all roses. I don’t think it is for any wholesaler out there. But we’re happy with the position we have.”

There is more about wholesaling in the July / August issue of Natural Stone Specialist magazine out now.