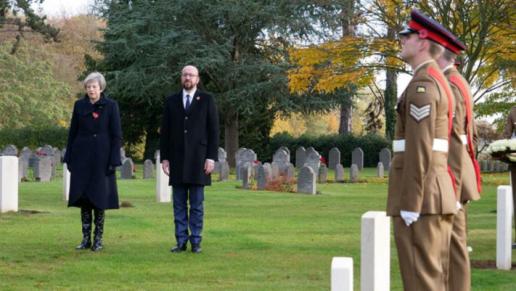 Prime ministers Theresa May and Charles Michel pay their respects to the first and last British soldiers to die in World War I at the Commonwealth War Graves Commission’s St Symphorien Military Cemetery today (9 November).

Prime Ministers Theresa May (Britain) and Charles Michel (Belgium) toured the Commonwealth War Graves Commission’s St Symphorien Military Cemetery in Hainaut, Belgium, this morning (9 November) to visit the graves of the first and last British soldiers to die in combat on the Western front in World War I, the centenary of the end of which is on Sunday.

There was a slight road incident on the way to the cemetery when one of the motorcycle outriders fell over while avoiding a car coming out of a side street. The appearance of the car does not seem to have been a deliberate attempt at disrupting the prime ministers' journey, just someone making a mistake. M Michel jumped out of the car he and Mrs May were in to make sure the motorcycle rider was all right. Nobody was seriously hurt.

At the cemetery, the two prime ministers observed a minute’s silence at the graves of Private John Parr and Private George Ellison before laying wreaths at the headstones.

Private Parr died on 21 August 1914. He was just 17. He was the first British combat death of the First World War. Private Ellison was killed only hours before the 11am ceasefire on 11 November 1918. By pure chance the graves of the first and last soldiers to die are directly opposite each other. The two soldiers were among some 16million people from both sides, from the armed forces and civilians, who died in the war.

St Symphorien is also the burial place of Canadian Private George Price, who is believed to be the last Commonwealth soldier to die in combat in the war after a sniper’s bullet struck him just minutes before the Armistice came into effect.