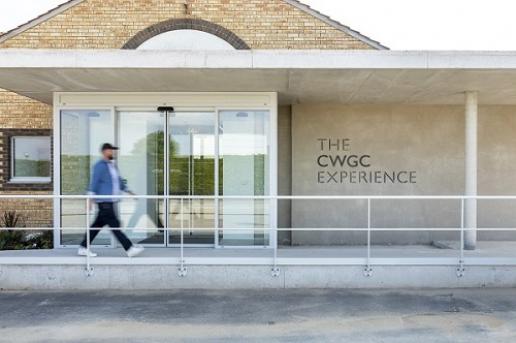 A small part of the Commonweralth War Graves Commission's first visitor centre, where you can see the work of craftspeople including its stonemasons.

See the CWGC video below

The CWGC Experience shines a light on the work of the organisation at the heart of remembrance of the British and Commonwealth armed forces personnel who died in the two World Wars. It looks after memorials commemorating 1.7million people at 23,000 sites around the world. They range from structures such as the Menin Gate at Ypres to indiviudual headstones.

The highly skilled team of blacksmiths, stonemasons, carpenters and horticulturists based at the visitor centre give visitors a chance to see how the restoration and conservation of CWGC sites designed by some of the 20th century’s most influential architects is carried out. Visitors can take a tour of the workshops and observe the craftspeople as they continue their century-long task of caring for some of the world’s most impressive and recognisable monuments and memorials.

During the tours, visitors will be able to watch the headstone production team combining the hand skills of the mason with 21st century computerised Accurite saws from the UK machinery supplier and Incimar machines that cut the carefully crafted regimental badges and personal inscriptions into the distinctive headstones. It is this work that ensures the names and legends of the men who died remain legible.

The CWGC Experience helps visitors to understand the work the Commission undertakes with a close and intimate look behind the scenes at the teams who still work painstakingly to care for the fallen - more of whom are discovered every year.

There are, on average, 40 discoveries of World War human remains every year. This is one of the most vital areas of the CWGC work, with its staff in France playing an integral role in the recovery process. At the visitor centre you can see how that happens.

The centre has been built with the help of £700,000 from a fund established by the government to redistribute fines paid by banks for illegally fixing interest rates.