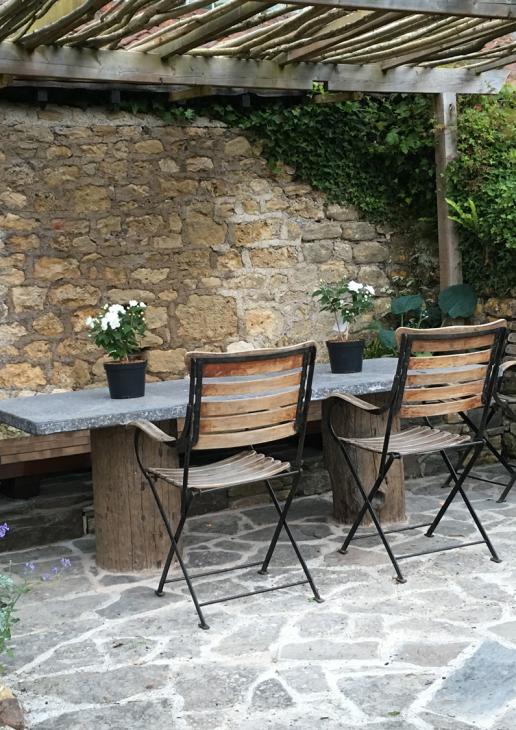 The table made from Belgian Blue limestone from Trans-European Stone standing on two reclaimed sections of timber from Falmouth Pier.

Sandra Choi, the Creative Director of Jimmy Choo, and her husband Tamburlaine Gorst, the former Head of Design at Kenzo Homme in Paris, have chosen Belgian Blue limestone from Trans-European Stone standing on two reclaimed sections of timber from Falmouth Pier to create a table in the garden of their home in Gloucester.

The table top measures 2200 x 900 x 45mm and weighs 300kg. And with such a distinguished base to rest on, the limestone table top had to undergo a meticulous process to create an antiqued finish in keeping with its surroundings.

The finished piece looks stunning in the context of the couple's picturesque garden. Tamburlaine says: "It has been a real pleasure to work with Trans-European Stone developing this blue limestone table top."

Trans-European Stone was formed in 2012 by Alan Gayle and Dirk Eeckhout to distribute, exclusively in the UK, Belgian Blue limestone from La Pierrre Bleue Belge, a major Western European dimension stone quarry operator with more than 65 years' experience in the manufacture and supply of building products.

Tamburlaine continued: "Dirk, in particular, was very responsive to the brief and then very reactive in sampling until the desired finish was developed. I was surprised at how quickly this happened once the go-ahead was given. The end result is a table top that looks beautifully authentically antique – just as we wanted it."

Belgian Blue is available in a multitude of finishes and is ideal for table tops, benches and all hard landscaping applications.