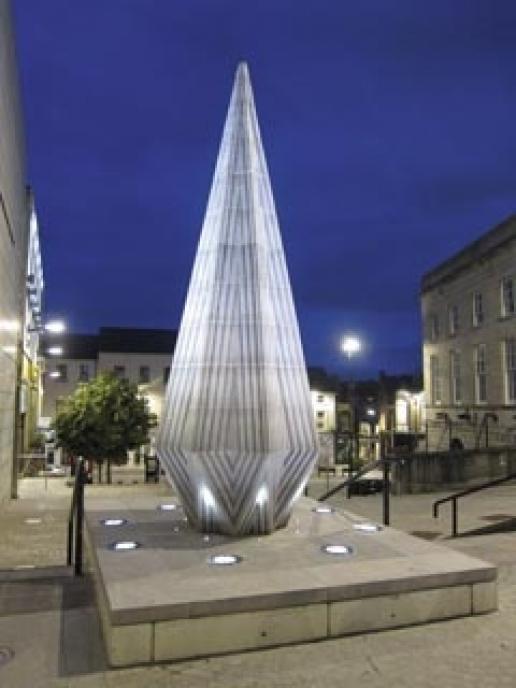 The theatre in Armargh, Northern Ireland, has a new star. Called StarStone, sculptor Richard Perry describes it as his best work yet.

“I am really proud of this sculpture, I think it is my best work to date.” Richard Perry, the artist based in Nottingham, is talking about his latest commission, the StarStone, unveiled on 22 June outside the Market Place Theatre & Arts Centre in Armargh, Northern Ireland.

It has a distinct sense of place. It is made from Armargh Marble, reflecting some of the most important architecture of the Northern Irish city – St Patrick’s Cathedral, the Courthouse, the Old Gaol – and was inspired by ideas of St Patrick bringing light to Ireland, represented by stars bringing light to the night sky. It was an idea that came to Richard from the way the Cathedrals seemingly reach for the stars from the tops of the hills on which the city was built. When the uplighting in the plinth illuminates the StarStone at night the theme is particularly poignant.

“It is a sculpture made of locally sourced materials and it will be around for hundreds of years, inspiring confidence and a sense of the future. I have had great support from all at Armagh Marble Company and from the local people who have called in to see the work as it evolved since December,” says Richard, who carved the piece at the workshops of Armargh Marble.

The stone company sourced the blocks of stone and sawed them for Richard to carve. And as the work progressed they opened their workshop to the public and invited schools to visit so the people of the town could see the piece being produced.

There could be no more appropriate material for the sculpture than Armargh Marble, yet until Roy Reaney started his business 13 years ago, the stone, which is hard and makes an ideal material for building and carving, had been virtually unused in the past hundred years. It is now once again proving popular for both domestic and commercial construction.

Blocks of stone are taken from the quarries to be crafted at the Armargh Marble premises between Armagh and Markethill using a combination of modern CNCâ€ˆequipment and traditional masonry skills.

The successful installation and positive reviews of the StarStone were rewarding after six months of work. The sculpture was the culmination of a new public art scheme started by the council in 2008 to celebrate Armagh’s position as a city of art, culture and science.

The sculpture stands 5.5m high and is 1.8m at its widest point. The height of the sculpture has been carefully considered to work with the backdrop of the theatre, the proportions of the plinth on which it is set, and the wider space of Market Square.

Armagh Marble is a stone that cuts freely in any direction and the buildings in the city are testament to its weathering ability. It is predictable and Richard confirms the fine carving qualities of the stone, with each cut revealing a fingerprint of fossils.

Roy Reaney at Armagh Marble Company says the business has continued to prosper even in the current construction downturn. The company quarries the stone and crafts a range of marble products using their CNC saws backed up by CAD design service. Roy maintains it is this combination that gives clients the personal design service and quality, tailor-made local products they want.

He acknowledges that having such an excellent stone available in white, pink, grey and brown, giving clients a choice, has helped him build the reputation he enjoys with clients and architects that has led to his success.