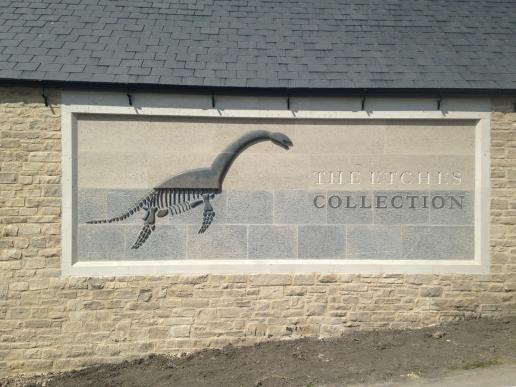 The pièce de résistance of the Purbeck stone contribution to The Etches Collection museum.

A new museum to house the Etches Collection of dinosaur fossils has walls of Purbeck limestone, a sedimentary stone laid down at the same time and place in which the dinosaurs lived and in which their fossilised remains and the footprints they left walking on the sediment that became the stones are sometimes found.

Our thanks to readers of Natural Stone Specialist magazine who have drawn our attention to a little jem of a new building in the village of Kimmeridge, eight miles south of Wareham in Dorset on the Jurassic Coast, with its famous rocks from the Triassic, Jurassic and Cretaceous, including Portland and Purbeck.

The Lottery-funded museum was erected last year to house the Etches Collection of dinosaur fossils – an internationally significant contribution to the fossil record from the Jurassic Kimmeridgian clay formation in Dorset accumulated by Steve Etches during the past 30 years.

The museum was designed by architect Ken O’Callaghan and constructed by Raymond Brown Building based in Ringwood, Hampshire. It has a cross laminated timber (CLT) frame with a Purbeck stone outer skin. 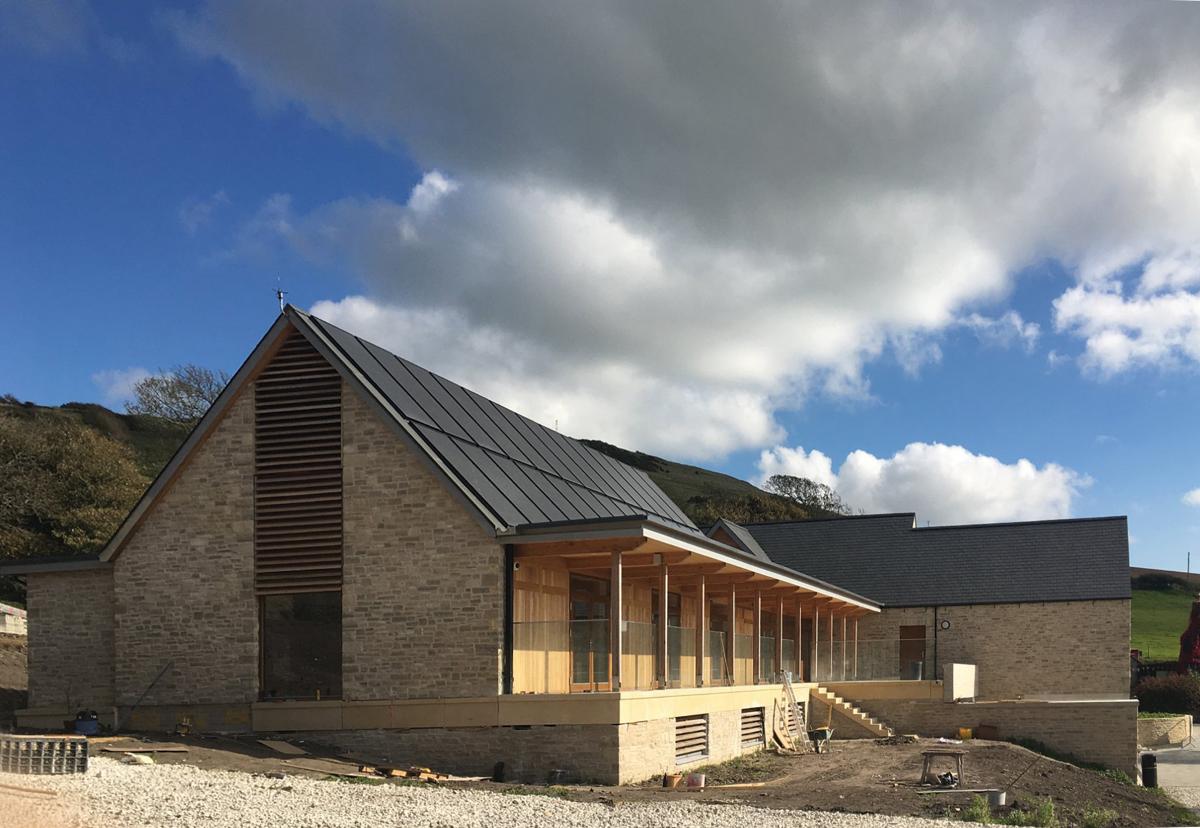 Steico Special, an external quality insulation water resistant board with a U-value of 0.041W/m2K, was used behind the mostly Downs Vein Purbeck stone walling.

The stone for the project was supplied by Landers Quarries, managed by Mark Haysom. He says the pièce de résistance of his contribution to the project is the plaque that announces ‘The Etches Collection’.

This is made from Purbeck Spangle at the top and Feather at the bottom. The Feather creates the sea in which the sediments were laid down that became the Purbeck stone. Dinosaur bones also sunk to the bottom of the sea to become the fossils found by Steve Etches 150million years later.

The Purbeck Feather on the lower part of the plaque is coarsely chisled to create the sea background that contrasts with the hand polished Feather of the bones and dinosaur.

Some of the work was carried out on a five axes GMM Litox (sold in the UK by Roccia Machine) with its Alphacam software installed at Landers Quarry a year ago. The operator was still exploring its capabilities when the plaque was produced in June last year. The project gave the company a chance to put the Litox through it paces.

The Litox is mainly used as part of an automatic line producing flooring and paving, especially for projects where stone is used to blur the barrier between the interior and exterior, as is popular these days.

As well as being part of the paving line, the Litox has a separate table where it can be used for projects such as the Etches Collection plaque. There would not be enough work as elaborate as the plaque to keep the machine busy all the time, but Mark wanted a machine that was flexible enough to be able to do that level of work when required.

As for the fossils that are now housed in the museum, they have been collected over the past 30 years by Steve Etches, who is local to Kimmeridge, a small part of the 95-mile Jurassic Coast with rocks recording 185million years of the Earth’s history. It is England’s only natural World Heritage Site and is now internationally renowned for the abundance of fossils on its shores. 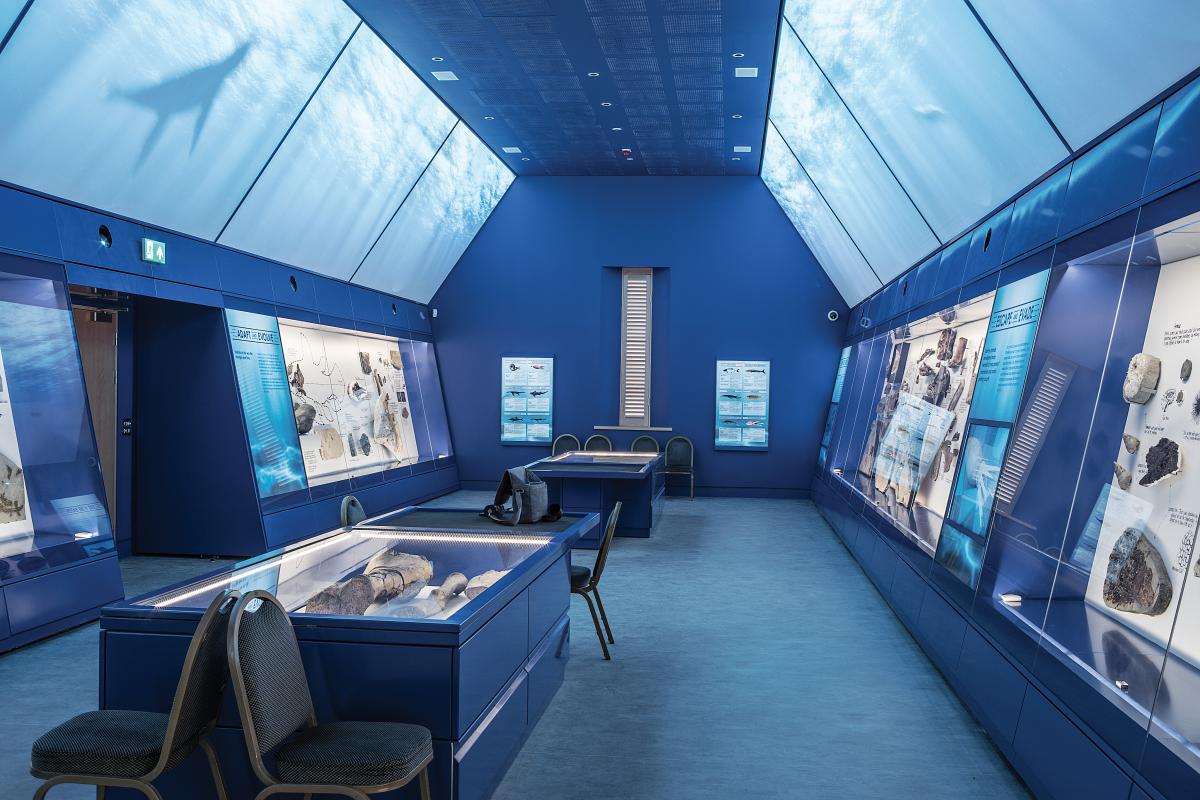 It is there that Steve has discovered, collected and researched more than 2,000 late Jurassic Kimmeridgian specimens, creating the most extensive and finest collection of fossil specimens ever found in the Kimmeridgian clay formation.

The Etches Collection museum is the result of Steve’s dogged determination not just to find and collect specimens, but also to curate them, providing an immaculate record that reveals how they bred, how they lived, how they died – a story he is now sharing through the new museum rather than at his house, where the collection was previously displayed.

When you enter the exhibition gallery you  experience what the museum describes as “a laboratory of the senses” as you are taken on an immersive journey through life underwater 150million years ago. It is created by CGI (computer-generated imagery) in ceiling panels. It is as if you are in a glass-panelled chamber under a Jurassic aquarium, looking up to view the surrounding water world.

Beneath the CGI panels, the Etches Collection is showcased in illuminated cabinets, with the fossil specimens providing the evidence of the computer-generated scenarios being played out above.

Many of the fossils Steve has discovered are new to science and of great palaeontological importance.