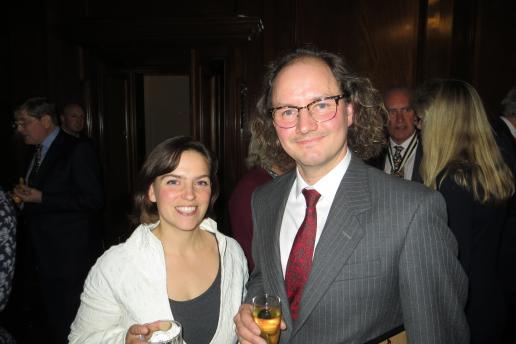 Congratulations to Catherine Martin and Paul Synan, who share the honours in this year's Duke of Gloucester Award, presented by His Royal Highness last night (27 November) in Mercers' Hall in the City of London.

The Duke of Gloucester Award is presented by the Masons Livery Company to the person (normally only one person) who has shown the most promise in developing their skills following the completion of their apprenticeship. It recognises the skills of craftsmen and women who have gone through a recognised apprenticeship for their craft, achieving City & Guilds Craft & Advanced or NVQ Level 3 at an approved college, and have between two and nine years post qualification experience.

Presenting the Awards, The Duke of Gloucester said they recognised the skills of those still at a young age who had been identified by the judges as having the ability to go on to be leaders in the world of stonemasonry. Winning the Award should help them further their careers.

Paul has worked as a Stonemason at Gloucester Cathedral since January 2015. He did not start out on that craft pathway. Having achieved a BA in Ancient History at King’s College (London) in 2008 followed by an MA in the same subject in 2010, he decided the best way to become involved with historic buildings was through stonemasonry. So he undertook the City and Guilds Advanced Diploma in Banker Stonemasonry and Level 3 Banker Stonemasonry at the Building Crafts College. During this time Paul was awarded the City & Guilds Medal of Excellence for the Advanced Diploma in Stonemasonry and the Worshipful Company of Masons Prize for Outstanding Practical Work.

On completion of his College training Paul gained a Building Craft Apprenticeship with the Prince’s Foundation for the Built Environment where he achieved an NVQ 3 in Heritage Masonry. Through this apprenticeship he was able to undertake a long work placement at Gloucester Cathedral, as well as with some commercial companies. Subsequently Paul was offered a two-year position at Gloucester Cathedral in 2014, and was made a permanent member of staff in 2016. Paul undertook the Cathedrals’ Workshop Fellowship (CWF) Foundation degree programme from September 2017 to June 2019, achieving a Merit at graduation.

Paul is married to Hannah (a teacher of English) and they have two young children, a daughter Ida and a son Moses, and live in Stroud. The years following Paul’s decision to travel on a craft pathway have been what he describes as ‘eventful’. Paul is a Yeoman Mason of the The Worshipful Company of Masons.

Gloucester Cathedral Architect Anthony Feltham-King RIBA writes: “Paul has been a key part of the team since 2014, making a vital contribution to the recently completed major conservation project to the Cathedral’s 15th century Lady Chapel. I have particularly appreciated the dedication Paul has shown in the diligent repair of the masonry. At high level, the three large pinnacles that adorn the gable elevation have been comprehensively repaired using new carved stones, and the parapet has been beautifully restored. Paul’s contribution to this work has been exemplary.”

Catherine Martin is a stonemason and sculptor with over a decade of experience in the heritage sector. Completing a Foundation degree in Art and Design at Falmouth College in 2002, Catherine then graduated with a BA (Hons) Fine Art, Sculpture from Chelsea College of Art in 2005. After working in her own fine art practice she decided to master the art of working in stone. Catherine completed her Stonemasonry Diploma and NVQ 3 in Banker Masonry at the Building Crafts College in 2009. Subsequently Catherine completed an apprenticeship at York Minster in 2012 and continued working on the conservation and restoration of the Minster’s renowned East Window. Catherine then became a graduate of the Cathedrals’ Workshop Fellowship (CWF) Foundation degree in 2013 remaining at the minster until 2014.

Thereafter Catherine formed her own company - James Stonework: stonemason, sculptor, carver, letter cutter and conservator. She recently designed and carved plaques for Liverpool Anglican Cathedral, the Tallow Chandlers’ Company and Worshipful Company of Masons. Catherine has also undertaken replacement stonework projects for Worcester Cathedral and All Souls College Oxford. Two of Catherine’s sculptures are part of a permanent collection at Hellens Manor house in Much Markle.

Catherine is a Freeman of the Worshipful Company of Masons and is married to Richard, also a stonemason and Freeman of the Company. Their home is in Great Malvern and they have a young son, Maximus.

Ulrika Knox of Knox-Mc Connell Architects Ltd. writes: “Catherine Martin of James Stonework was selected through a limited competition to design and carve a new commemorative plaque for Liverpool Cathedral. Catherine’s design was uniquely innovative and referred to the context in the use of the particular St Bees red sandstone for the work. She developed the lettering in a way that conveyed the message that the Church of Scotland client wanted, whilst creating stylish impact that encouraged the viewer to linger and study the piece. She showed great skill in carving both raised and incised lettering and enhanced areas with gilding. She was an absolute pleasure to work with.”