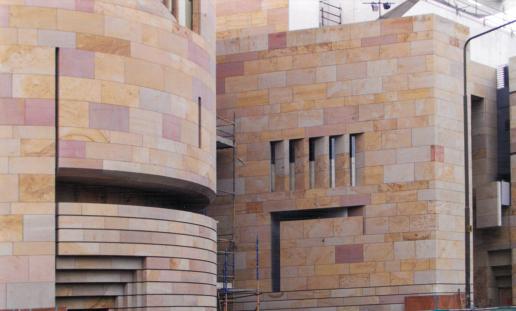 The Egyptians are questioning the authenticity of limestone cladding said to be from the Great Pyramid of Giza that the Museum of Scotland intends to display in a new Ancient Egypt gallery due to open in February. If it is genuine, they want it back.

The National Museum of Scotland is due to open a new permanent gallery called Ancient Egypt Rediscovered on 8 February. The centrepiece of the exhibition is a piece of limestone masonry labelled as a casing stone from the Great Pyramid of Giza in Egypt built for King Khufu about 4,500 years ago.

But the Egyptians question the authenticity of the stone because they believe the pyramid was clad in granite.

If it wasn't and the stone is genuine, they say it could have been stolen and in which case they want it back.

Shabaan Abdel Gawwad, supervisor-general of Egypt's Antiquities Repatriation Department, has told an Eqyptian website that he wants an official team to visit Scotland to inspect a certificate of possession and export documents.

The museum, in Chambers Street, Edinburgh, maintains the pyramid was clad in fine Tura limestone extracted from a quarry not far from the pyramid. A spokesperson for National Museums Scotland has told BBC Scotland that the stone was found by British engineer Waynman Dixon in a rubble heap for road works being undertaken by the Egyptian government in 1869. Dixon was working on behalf of the Astronomer Royal of Scotland, Charles Piazzi Smyth.

The spokesperson said: "In 1865 Piazzi Smyth had initiated a programme of research, including the first largely accurate survey of the Great Pyramid. In doing so, he had the official permission of the Viceroy of Egypt and the assistance of the Egyptian Antiquities Service. The stone was brought to the UK by Waynman Dixon in 1872 and transported to Charles Piazzi Smyth in Edinburgh.

"After reviewing all the documentary evidence we hold, we are confident that the appropriate permissions and documentation were obtained in line with common practice at the time."

If nothing else, the discourse has ensured the Museum of Scotland has achieved substantial publicity for its new gallery, which is still seeking donations to pay for its transformation.