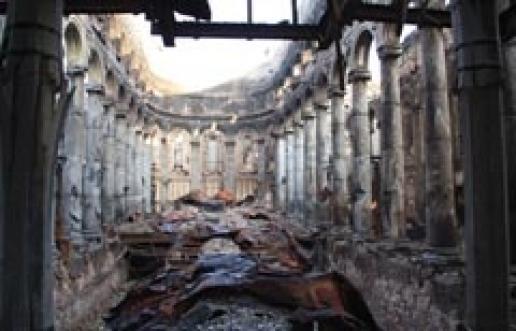 St Mel's after the fire.

The renovation of St Mel’s Cathedral in Longford, Ireland, following a devastating fire after midnight mass on Christmas Eve 2009, has seen all of its 28 Irish Blue limestone Ionic columns replaced. NSS went along to see the project.

One of the new columns installed after the fire.

It had been a particularly cold day and the boiler had been on longer than normal to keep the church warm. Hot cinders in the flue moved overnight and at 3am started a fire in the boiler room beneath the alter that devastated the Cathedral.

The damage was so bad there was talk of demolishing the remains, but in the end it was decided to renovate the building and in September this year there was an open day at the Cathedral to give the congregation a chance to witness the renovation work being undertaken.

It was the last chance they will have to see inside the Cathedral, now half way through a restoration programme, until it re-opens, fully restored, in time for midnight mass at Christmas next year.

It was so cold in the early hours of Christmas Day 2009 that the water in the hoses of the firefighters froze as flames reportedly leapt more than 15m into the sky above the building. The fire was eventually extinguished, but the building was devastated, with the copper roof having crashed down on to and through the wooden floor below, with its central aisle of a Ludwig Oppenheimer mosaic. A concrete floor has now been installed that will allow the crypt to be used for community purposes.

The church had originally had a slate roof, but in the 1950s the weight was found to be pushing the walls apart and it was replaced with copper, which had hindered the firefighters because they could not break through it to pour water on the flames inside. The rebuild has returned to the use of slate, with Welsh slate from Penrhyn Quarry being chosen.

The talk of demolishing the perilous remains of the building were brought to an end by building fabric consultant Carrig, with offices in Dublin and London. Carrig was commissioned to assess the degree of damage and ascertain whether or not the structure could be saved. Carrig Director Peter Cox says it was a frightening site to go on to. “Bits of material were falling around you.”

After a thorough investigation of the damage and into the possible sources of the 300m3 of Irish Blue limestone needed for repairs, in September 2011 Carrig produced a 90-page report. Part of it reads: “The single-most significant factor in restoring the cathedral is the stone procurement package. The stone required to replace the 28 columns and make the repairs required to the 38 pilasters will represent the largest stone procurement order in the last four years and probably for the next five years. Three potential supply sources have been identified.

“However, with the lead-in time required to win the stone block from the quarry, the precision fabrication of the elements required and then installation of the columns and repairs to the pilasters on site, the stone package alone will require a possible 14 months to complete. Likewise the ornate plaster work will take approximately 12 months to complete and the contracts cannot fully run concurrent.”

Peter Cox told NSS: “We took samples from the damaged stone and did a full geological and chemical analysis so we had a datum to start looking for a replacement. We did a huge amount of research. Our geologist, George Sevastopulo, and I toured all the stone quarries – most working but one not, although it could have been

re-opened – and made comparative analyses of the stones. We eventually produced a full stone procurement specification. We had a very, very strict quality control methodology.”

The three quarries considered capable of producing the stone to the specification required and three stone fixing contractors were asked to tender. The stone supplier chosen was Stone Developments and the main contractor chosen was an Irish joint-venture created for the project, Gem-Purcell.

St Mel’s was built between 1840 and 1856 (with work suspended during the famine of 1845-47). A belfry and portico are later additions. The stone used for the majority of the construction work to the neo-classical design of Joseph B Keane came from a quarry in Newtown Cashel, transported originally by barge, while the stone used for the pilasters came from Creeve Quarry.

Neither quarry is in production today and following extensive analysis of alternative sources of stone, some specific beds in Stone Development’s quarry in Carlow were chosen as the best substitute for both of the original materials.

It was difficult to explain the extent and nature of the damage to the columns at first, but the size of the sections of stone used provided a clue. Those at the base of the columns were 1.8m high – impossible in Newtown Cashel stone if it had been worked on bed because the beds were no more than 1m deep. Carrig concluded the stone must have been worked on edge, which explained everything. Metal cramps had also contributed to the damage because the metal would have expanded more than the stone in the intense heat of the fire.

All the 7.8m-high columns had to be replaced, which involved supporting the structure above them while the originals were removed and new columns constructed in situ. Retaining the existing structure above meant the ‘drum’ sections of the columns could not simply be lowered into place but had to be slid in.

The way the ionic capitals were fabricated, although not the look of them, had to be amended to allow them to be slid into position on top of the columns.

Lead jointing was used between each section of the column, as it had been on the originals, but in order for the columns to fit together accurately they had to be produced to tolerances of ±1-2mm.

Not wanting to repeat the mistakes of the past, this time the columns have been constructed of sections worked on bed, but the replacement columns still had to look like the originals. Stone Developments could not quite reach a 1.8m bed height needed to make the sections the same height as the originals, but it was agreed in the end that 1.75m would be acceptable – although that was pushing the quarry to its limits and reduced recovery rates of quarried stone to 13% instead of the usually expected 25%.

By the time it is finished, the project will have cost £32million. £50,000 of that was spent on making a test column, which Peter Cox says was the most important £50,000 of the whole job. “We learnt so much from doing that,” he says.

On-site, they had to find some way of manhandling the sections of column weighing as much as 2tonnes each into position, because it was not possible to get lifting equipment through the door. They made a trolley especially to carry the blocks on a temporary plywood roadway and it was still as much as five men could do to get the sections to the required position.

The columns were replaced one at a time and in a sequence designed to minimise the stress in any one area. Irish consulting engineer Punch kept an extremely close eye on the building during the work and, much to the relief of all concerned, recorded movement measured in microns rather than millimetres.

There are around 50 people on-site at any one time, including 12 people from the building industry who are on a full-time training programme (run through Historic Scotland because Ireland does not have such a programme of its own), especially for the horse-hair reinforced lime plasterwork being produced by plastering contractor George O’Malley Plastering Ltd.

There were 18 statues in the church when it caught fire, only three of which survived and two of those were badly damaged. Only the statue of St Mel was largely untouched by the heat and flames of the inferno. It was the only one carved in stone, the others having been made from plaster and terracotta. n

* Stone Developments also talked to Natural Stone Specialist about its production of the stone for St Mel’s in the context of developments at the company. You can read that here.