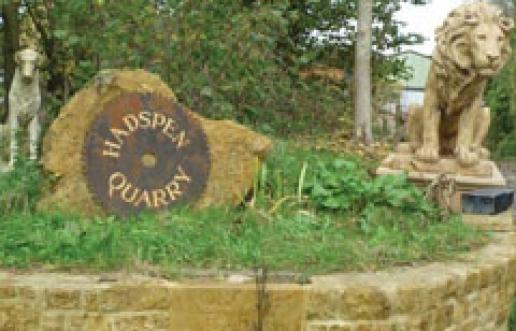 Godfrey Hall lives in a cottage in Castle Cary dating back to the 1700s and built of Cary Stone. “It is still in excellent order and totally waterproof, a sign of a good strong product,” he told NSS when he contacted us to tell us about developments taking place at Hadspen Quarry, the source of Cary stone today.

Castle Cary is a charming West Country market town sometimes described as the Jewel of Somerset, thanks in no small part to the rich golden limestone of which it has been built – and continues to be built thanks to the re-opening of Hadspen Quarry 13 years ago.

Hadspen is a hamlet just outside Castle Cary and a year after its quarry, which had closed in 1938, was re-opened it was taken over by the current operators, Rob Comer and Dave York.

Both men had previously been builders. They had also been customers of the quarry since it re-opened. When the opportunity arose to own the quarry, they grabbed it and now concentrate on supplying the stone as a growing number of products.

It is a small quarry with three distinct beds that vary in height from 150mm to 500mm or so. The top bed is a smooth, golden stone. Below that is a lively, fossiliferous bed. Below that is what Hadspen calls a Blue Heart bed, which has a blue stone inside a buff shell. The Blue Heart has not traditionally been used but it has excellent properties and appeals to today’s aesthetics.

A new house on the edge of the quarry is almost completed. It will be the family home of Rob and his wife, Lucy. It is already an excellent showcase of the various stones from the quarry for visitors to see – and a sign on the A359 that runs alongside the quarry invites passers-by to come in and have a look. Eventually, Hadspen intends to open a showroom on the site to show off the full range of products, including floor tiles and fireplaces, walling and planters.

About 1,000tonnes of stone are currently being taken from Hadspen Quarry each year from consented reserves of around 40,000tonnes. But planning permission allows up to 2,500tonnes of stone to be removed annually and Rob and Dave would be happy to get sales up to that level.

They are hoping a re-launched website due to go live in April will take sales national – maybe even international. The intention is to allow visitors to the site to buy directly from it. Floor tiles up to flag size of 800mm x 1000mm and a garden range are expected to be key performers.

In anticipation of the increased demand, an additional two saws are being added to the three already working in the quarry, although Rob complains that the two-acre quarry floor where the stone is stored and processed is getting a little cramped.

The oolitic limestone from the quarry, sold under the name of Cary stone, is relatively easily won, although top soil and a layer of rubble brash over the stone does have to be removed and stored for backfill and restoration.

Once exposed, the three beds of stone are pulled from the 8m high face using two 15tonne Daewoos with rippers and transported to the sawing, cropping or masonry sheds by a telescopic JCB handler and three tonne dumptruck.

There are seven people working in the quarry and dressing the stone, including Rob and Dave, while Lucy and Dave’s wife and Company Secretary, Steph, work in the office. Lucy has added a product range of her own to the mix – games that use the blue and buff stones to distinguish between markers and squares on boards. They include ‘Domistones’ – dominoes made of stone.

Hadspen Quarry was, like the rest of the natural stone industry and the world in general, hit by the recession, but for the past two years it’s “gone exponential”, as Lucy puts it, adding: “This January is the busiest we have ever been.”

It helped that Hadspen House, a large property near the quarry, was sold last year for several million pounds and the new owner is now buying a lot of masonry from the quarry to renovate and alter the property.

But it is not an isolated case. Many people are choosing the stone for their home improvements and extensions and there is an increasing number of small builders putting up four or five houses at a time in highly desirable locations. Of course, the planners also help because they like to see the stone used as a match to the stones used by previous generations. It maintains the distinctive charm that attracts visitors not just to Castle Cary but also a wider area across the region.

And even if Cary stone is not what you need for your project, Hadspen Quarry might still be a suitable source of your stone because although 75% of what Hadspen sells comes from its own quarry, it also cuts and shapes Ham stone, Doulting, Blue Lias, Portland and other stones from the region.

It is open to both trade and the general public and being within easy reach of the West Country arterial A303 and not far from the M5, the quarry is ideally placed to supply stone to developments wherever it is needed anywhere in the country. Rob and Dave are happy to quote on any size of project and will produce the stone to order.

As well as the more modest domestic work, recent projects supplied by Hadspen Quarry have included the restoration of Glastonbury Tor and work on Fleet Street in Beaminster, another idyllic market town, although in this case in Dorset.

In fact, you could say that Hadspen Quarry is a jewel of Somerset in its own right… or at least a little gem.