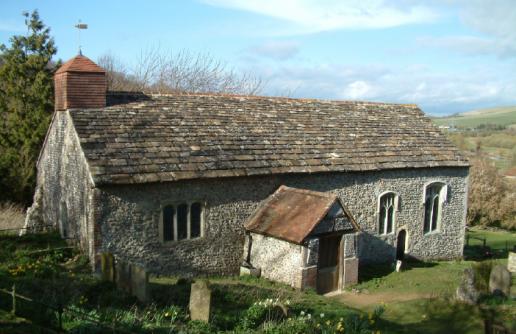 The Society for the Protection of Ancient Buildings (SPAB), along with conservation firms and other heritage organisations, says there is a crisis of supply of Horsham stone roofing slabs.

Horsham Stone & Reclamation runs a quarry extracting Horsham Stone, but thin slabs that can be used for roofing tend to come from the top of the quarry and are exhausted from that source, although the company does have stocks of reclaimed Horsham Stone roofing.

The Horsham Stone roofs are a defining feature of many historic buildings and churches in and around the West Sussex market town from which the stone takes its name, as well as the wider areas of Surrey and East Sussex. Local building materials, particularly stone, give an area its regional distinction.

Horsham Stone (variously described as a silicious limestone or a carboniferous sandstone) has been used on many Grade II* and Grade I listed buildings in the area, including the Arts & Crafts masterpiece of Goddards in Dorking, Surrey, and Sackville College in East Grinstead.

SPAB says there is no geologically appropriate substitute for Horhsam Stone available. Those who care for Horsham stone-roofed buildings must make up any shortfall with another material (they usually use clay tiles) or use reclaimed stone slates, which often means using stone taken from other historic structures.

SPAB and others are calling for the resurrection of a Horsham stone supply to ensure that local buildings can be repaired to retain their special character. This month (July) SPAB contacted Horsham District Council to discuss what it terms as this crisis. SPAB believes generating a new supply of the stone could be a valuable commercial opportunity for a roofing or building firm.

The extraction of Horsham stone for roofing is not a large-scale quarrying process and should not provoke public outcry. It involves shallow ‘delves’ from which stone is lifted from the upper layers of the geological strata.

SPAB proposes that the Horsham Local Plan, in combination with the West Sussex Minerals Local Plan, provides a framework for identifying the most promising sites for investigation and those willing to extract the stone are invited to co-operate on finding and testing possible sources of the stone.

The West Sussex Mineral Plan has the vision that ‘By 2033 West Sussex will… be a place where the use of… locally sourced stone, particularly Horsham Stone… has enhanced local distinctiveness’ (6.6.2).

Horsham District Council is now actively working with Historic England to solve the Horsham slab crisis and has welcomed further input from SPAB.

Company Tags:
Society for the Protection of Ancient Buildings
https://www.spab.org.uk